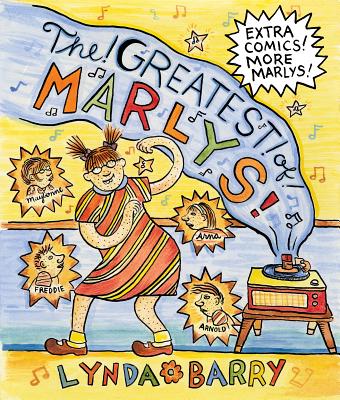 The Greatest of Marlys

Welcome to the world of Marlys and Maybonne

"Lynda Barry's comics were my YA, before YA really even existed. She's been writing teen stories with an incredibly clear voice since the early 80s. [The Greatest Of Marlys] is raw, ugly, hilarious, and poignant." --Raina Telgemeier, Smile & Drama

Eight-year-old Marlys Mullen is Lynda Barry's most famous character from her long-running and landmark comic strip Ernie Pook's Comeek, and for good reason! Given her very own collection of strips, Marlys shines in all her freckled and pig-tailed groovy glory. The trailer park where she and her family live is the grand stage for her dramas big and small. Joining Marlys are her teenaged sister Maybonne, her younger brother Freddie, their mother, and an offbeat array of family members, neighbors, and classmates.

Marlys's enthusiasm for life knows no bounds. Her childhood is one where the neighborhood kids stay out all night playing kickball; the desire to be popular is unending; bullies are unrepentant; and parents make few appearances. The Greatest Of Marlys spotlights Barry's masterful skill of chronicling childhood through adolescence in all of its wonder, awkwardness, humor, and pain.


Praise For The Greatest of Marlys…

"The Greatest Of Marlys is a collection of [Barry’s] best cartoon work, and as such it's a perfect introduction to her (we're approaching a word not commonly employed when talking of cartoons) oeuvre… How many writers can place us back in third grade without getting vague or wistful? Lynda Barry has no peer." -Dave Eggers, New York Times Book Review

"Lynda Barry is an extraordinary talent, with a real gift for creating utterly believable child characters. Marlys is so well written that you end up feeling like some of these things happened to you, regardless of how different your childhood was."— The Quietus

"Marlys ranks with Charlie Brown as one of the most genuine and poignant adolescent protagonists in serial comics...If you haven't read Barry, let this book be your gateway: she is one of a kind, and with Marlys, she is irresistible."— The Paris Review

"You'll cheer for Marlys and empathize with her embarrassments, just like the supportive adult figure you wished you had when you were her age."— Huffington Post

"Barry's unique genius lies in her capacity to wiggle under your skin and, once there, to wiggle some more until you're gasping and twitching, not sure if it's with laughter or something else. She provokes existential squirminess."— NPR

"The Greatest of Marlys shows some of the earliest iterations of the weird, warm, boundless energy that has characterized [Barry's] career. It also helps preserve a character who was considered by millions of readers (and hopefully now by millions more) a great friend."— Chicago Reader

"Barry is one of American literature's great chroniclers of childhood. Her comic strips, drawn in disarmingly and deceptively childlike lines, distill the essence of fried bologna sandwiches and stray dogs, mysterious teenage bedrooms, and kickball at dusk."— Publishers Weekly

Lynda Barry has worked as a painter, cartoonist, writer, illustrator, playwright, editor, commentator, and teacher and found that they are very much alike. She lives in Wisconsin, where she is associate professor of art and Discovery Fellow at University of Wisconsin Madison.


Barry is the inimitable creator behind the seminal comic strip that was syndicated across North America in alternative weeklies for two decades, Ernie Pook's Comeek, featuring the incomparable Marlys and Freddy. She is the author of The Freddie Stories, One! Hundred! Demons!, The! Greatest! of! Marlys!, Cruddy: An Illustrated Novel, Naked Ladies! Naked Ladies! Naked Ladies!, and The Good Times are Killing Me, which was adapted as an off-Broadway play and won the Washington State Governor's Award.


She has written three bestselling and acclaimed creative how-to graphic novels for Drawn & Quarterly, What It Is which won the Eisner Award for Best Reality Based Graphic Novel and R.R. Donnelly Award for highest literary achievement by a Wisconsin author; Picture This; and Syllabus: Notes From an Accidental Professor, and In 2019 she received a MacArthur Genius Grant. Barry was born in Wisconsin in 1956.