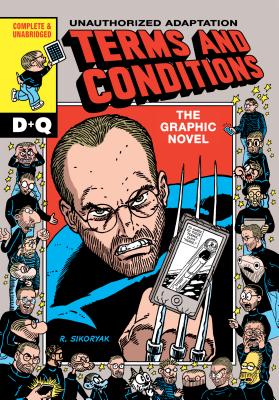 “Mischievous, pastiche-heavy artist Robert Sikoryak…upped the difficulty level for his long-term conceptual project: Instead of abridging a book, he lifted the complete text of Apple’s mind-numbing corporate boilerplate, which users must agree to before accessing iTunes, and mashed it up with art invoking more than a century of comics.”—New York Times

For his newest project, R. Sikoryak tackles the monstrously and infamously dense legal document, iTunes Terms and Conditions, the contract everyone agrees to but no one reads. In a word for word 94-page adaptation, Sikoryak hilariously turns the agreement on its head—each page features an avatar of Apple cofounder and legendary visionary Steve Jobs juxtaposed with a different classic strip such as Mort Walker’s Beatle Bailey, or a contemporary graphic novel such as Craig Thompson’s Blankets or Marjane Satrapi’s Persepolis.

Adapting the legalese of the iTunes Terms and Conditions into another medium seems like an unfathomable undertaking, yet Sikoryak creates a surprisingly readable document, far different from its original, purely textual incarnation and thus proving the accessibility and flexibility of comics. When Sikoryak parodies Kate Beaton’s Hark A Vagrant peasant comics with Steve Jobs discussing objectionable material or Homer Simpson as Steve Jobs warning of the penalties of copyright infringement, Terms and Conditions serves as a surreal record of our modern digital age where technology competes with enduringly ironclad mediums.

"The juxtaposition is hilarious, and we see a Steve Jobs-like character as a stand-in for the heroes of each original work, with the scenes peppered with Apple devices and references alike."—Macworld

"Adapting the legalese of the iTunes Terms and Conditions into another medium seems like an unfathomable undertaking, yet Sikoryak creates a surprisingly readable document, far different from its original, purely textual incarnation and thus proving the accessibility and flexibility of comics."—Adweek

"It’s a prodigious feat of pastiche that gives rise to multiple interpretations... Sikoryak (Masterpiece Comics) is an undeniably talented artist with a keen ability to capture different styles, as well as a sly conceptual satirist and prankster. Few will ever actually read these terms and conditions, but that’s basically the point."—Publishers Weekly Starred Review

"An interesting experiment... An example of how to use art to change how readers approach narrative content."—Library Journal

"Terms and Conditions serves as both a digestible guide to the doc and a visual history of comics."—Vice: The Creators Project

"Terms and Conditions serves as a surreal record of our modern digital age in which the rules for our tools have become Bible-length, and just as sacred."—Print Magazine

“Each page is a loving tribute to a comic book that Sikoryak loves or respects… Sikoryak hasn’t just thrown the text at random pictures; he appears to have actually read this thing through and selected from the vast historic tapestry of comic book imagery a highly appropriate sequence that seems to suit the relevant quoted words perfectly.”—The Independent

“Cartoonist R. Sikoryak is trying to inject some fun into the process of reading through thousands of words of mouseprint to find out whether or not you’re signing away your first born to Apple.”—Consumerist

"... a graphic adaptation of something a lot of people have seen, but almost no one has actually read."—Comics Alliance

"... a remarkable experiment in how we read comics and what we get from them."—The Creative Review

"Robert Sikoryak is a virtuoso cartoonist who draws so well he can not only draw whatever he wants, he can draw it to look like any other cartoonist he wants to pay tribute to, as well."–The Observer

"With [Terms and Conditions] artist R. Sikoryak aims to achieve the impossible: to make us read a document that virtually all of us have willfully ignored."–Slate