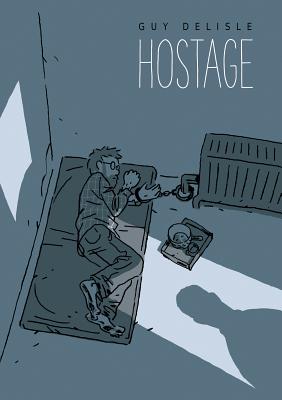 APPEARED ON BEST OF THE YEAR LISTS FROM NPR, WASHINGTON POST, PASTE, AND MORE!

How does one survive when all hope is lost?

In the middle of the night in 1997, Doctors Without Borders administrator Christophe André was kidnapped by armed men and taken away to an unknown destination in the Caucasus region. For three months, André was kept handcuffed in solitary confinement, with little to survive on and almost no contact with the outside world. Close to twenty years later, award-winning cartoonist Guy Delisle (Pyongyang, Jerusalem, Shenzhen, Burma Chronicles) recounts André’s harrowing experience in Hostage, a book that attests to the power of one man’s determination in the face of a hopeless situation.

Marking a departure from the author’s celebrated first-person travelogues, Delisle tells the story through the perspective of the titular captive, who strives to keep his mind alert as desperation starts to set in. Working in a pared down style with muted color washes, Delisle conveys the psychological effects of solitary confinement, compelling us to ask ourselves some difficult questions regarding the repercussions of negotiating with kidnappers and what it really means to be free. Thoughtful, intense, and moving, Hostage takes a profound look at what drives our will to survive in the darkest of moments.

"Hostage shows what it's like to be held captive ... Delisle brings readers into the room with the hostage and, more importantly, into his state of mind."—The Atlantic

"[Hostage is] an indelible portrait of an ordinary person facing a frightening ordeal."—Publishers Weekly, Starred Review

"The account of André's experience... would be powerful enough, if depicted in prose alone. But Hostage is a comic, and it's Delisle's art — his character design, his use of page and panel layout to underscore the mind-numbing sameness of solitary confinement while controlling the story's mood and pacing — that makes us feel André's plight so deeply."—Glen Weldon, NPR

"This true story of a man’s kidnapping in Chechnya confirms Guy Delisle’s position as one of the greatest modern cartoonists."—Rachel Cooke, The Guardian

"Harrowing and beautiful... I've felt haunted by the book since I finished it."—John Warner, Chicago Tribune

"Delisle’s new book, Hostage, is his best since Pyongyang... In its beat-by-beat, day-by-day scope, is ultimately a travelogue about the power of imagination."—Hillary Chute, New York Review of Books

"In muted grays, André’s capture is depicted as both terrifying and monotonous at once. The terror of loneliness is present in every frame—the cells, tightly centered on André, claustrophobia-inducing in their own right."—Kevin Nguyen, GQ

"The gutters of a comic have never felt more like those prison bars than they do in Hostage. Still, Delisle’s humane approach keeps this from become a trip to the zoo; he makes you not just see, but feel André’s anguish."—Mark Peters, Salon

"A modern master of the travelogue... [returns] with a surge of blood-pumping adrenaline."—Amos Barshad, The Fader

“Guy Delisle conveys great, slow-burning tension in this sublime account of what Christophe Andre endured as a hostage in Chechnya. Delisle’s controlled handling of claustrophobic physical and mental spaces – and the rhythm he generates – is the work of a patient master.”—Joe Sacco, author of Palestine

“A book about a man trapped in the corner of a room should not be exhilarating, but somehow Delisle has managed to create just that. He takes us through Christophe André’s narrative of his time spent as a prisoner with an attention to detail that makes you feel like you’re right there with him, chained to a radiator, counting the days to keep yourself from losing your mind. My heart was racing by the end.”—Sarah Glidden, author of Rolling Blackouts

Guy Delisle was born in Quebec City, Canada. His bestselling and acclaimed travelogues (Pyongyang, Jerusalem: Chronicles from the Holy City, Burma Chronicles, and Shenzhen) are defining works of graphic nonfiction, and in 2012, Delisle was awarded the top prize in European cartooning when the French edition of Jerusalem was named Best Album at the Angoulême International Comics Festival. He lives in France with his wife and children.
Loading...
or support indie stores by buying on