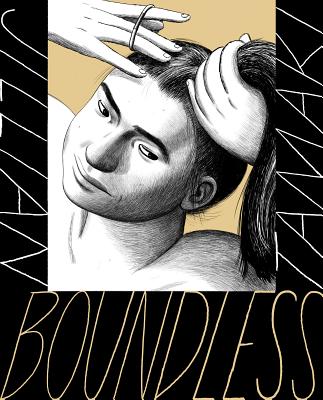 Jenny becomes obsessed with a strange "mirror Facebook," which presents an alternate, possibly better, version of herself. Helen finds her clothes growing baggy, her shoes looser, and as she shrinks away to nothingness, the world around her recedes as well. The animals of the city briefly open their minds to us, and we see the world as they do. A mysterious music file surfaces on the internet and forms the basis of a utopian society–or is it a cult?

Boundless is at once fantastical and realist, playfully hinting at possible transcendence: from one’s culture, one’s relationship, oneself. This collection of short stories is a showcase for the masterful blend of emotion and humour of award-winning cartoonist Jillian Tamaki.

"Each story is as indelible as it is singular [and] so beautifully told that after a while you begin to feel that Tamaki... is capable of almost anything. And perhaps she is."—The Guardian

"Restlessly versatile… Boundless collects short stories that are so far apart from one another in tone and technique that they could almost pass for the work of entirely different artists."—New York Times

"Boundless feels at one time wholly of this moment and otherworldly, presenting a reality that’s tilted slightly off its axis. Her evocative drawings are intimate, energetic, in moments loose and casual, in others tight and finely rendered."—Boston Globe

"Jillian Tamaki's short comics are propelled by contemporary phenomena... but such elements never seem to shackle Boundless to the present. Tamaki's existential wistfulness lifts text messages and memes into the realm of archetype [with] inventive, versatile art."—NPR Best Books of 2017

"[Jillian Tamaki] dazzles with her impressive range in this collection...Lush, vibrant, and packed with emotion."—Entertainment Weekly

"Tamaki's voice shines throughout this masterpiece... as she effortlessly blends love and pain, fantasy and reality."—Nylon

"A fantastical and surreal look at modern life, in gorgeous pencil sketch."—Glamour

"A profoundly honest, bittersweet picture of human nature, made all the more haunting by her enchanting artwork."—Booklist, Starred Review

"Jillian Tamaki seems capable of drawing anything, in any style, and making it appear effortless. Her writing could be described in the same way, and it's thrilling to see those twin skills of hers united in service of these daring, unpredictable, and quietly strange stories."—Adrian Tomine, author of Killing and Dying

"Jillian Tamaki's finely hewn tales read like transmissions from a parallel universe just as lonely as our own, but in a more beautifully felt, hilariously ephemeral way. These are precious stories, stories to fall into like an odd dream you left too soon."—Alexandra Kleeman, author of You Too Can Have a Body Like Mine