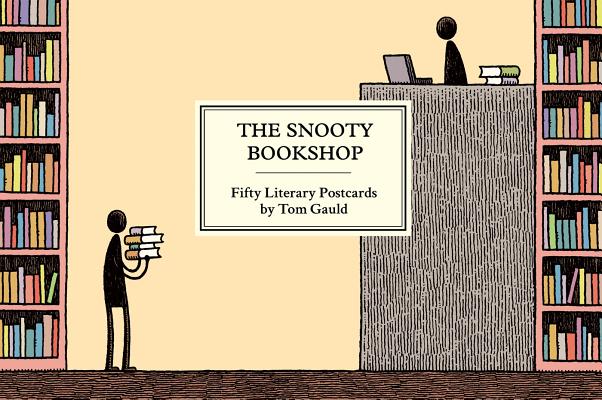 Fifty postcards from The Guardian, by Britain’s most well regarded cartoonist

Tom Gauld (Mooncop, You’re All Just Jealous of My Jetpack, Goliath) has created countless iconic strips for The Guardian over the course of his illustrious career. A master of condensing grand, highbrow themes into one- to eight-panel comics, his weekly strips embody his trademark British humor while simultaneously opening comics to an audience unfamiliar with the artistry that cartooning has to offer. Funny but serious, these postcards allow Gauld to put his impressive knowledge of history, literature, and pop culture on full display—his impeccable timing and distinctive visual style setting him apart from the rest.

This postcard set celebrates more than a decade of Gauld’s contributions to The Guardian, with fifty of his most beloved strips, on everything from Samuel Beckett’s sitcom pitches (such as Waiting for Kramer: a show where two men await the arrival of a man named Kramer who never comes), “Procrastination for Creative Writers, a 10-Week Course,” and “Poetry Anthologies for People Who Don’t Like Poems.” Witty and beautifully drawn, The Snooty Bookshop will make you chuckle at least fifty times, guaranteed.

“Quippy, slightly sardonic takes that go down easy . . . but will make you think long after you’ve left them.” —The Huffington Post

“Minimalist, elegant, and witty.” —The Verge

“[Gauld] finds new things to say about the literary world, pop culture and the way people interact with stories in general.” —The Hollywood Reporter

Tom Gauld is a cartoonist and illustrator. He has weekly comic strips in The Guardian and New Scientist and his comics have been published in The New York Times and The Believer. In addition to his graphic novels Goliath, You’re All Just Jealous of My Jetpack, and Mooncop, he has designed a number of book covers. Gauld lives and works in London.
Loading...
or support indie stores by buying on