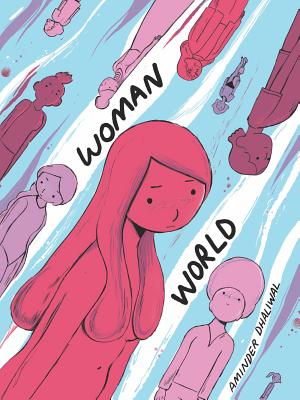 Best of 2018 lists from Nylon, the New York Public Library, Boing Boing, and The Cut!

With her startling humor, it’s no surprise that Aminder Dhaliwal’s web comic Woman World has a devoted audience of more than 150,000 readers, updated biweekly with each installment earning an average of 25,000 likes. Now, readers everywhere will delight in the print edition as Dhaliwal seamlessly incorporates feminist philosophical concerns into a series of perfectly-paced strips that skewer perceived notions of femininity and contemporary cultural icons. D+Q’s edition of Woman World will include new and previously unpublished material.

When a birth defect wipes out the planet’s entire population of men, Woman World rises out of society’s ashes. Dhaliwal’s infectiously funny instagram comic follows the rebuilding process, tracking a group of women who have rallied together under the flag of “Beyonce’s Thighs.” Only Grandma remembers the distant past, a civilization of segway-riding mall cops, Blockbuster movie rental shops, and “That’s What She Said” jokes. For the most part, Woman World’s residents are focused on their struggles with unrequited love and anxiety, not to mention that whole “survival of humanity” thing.

Woman World is an uproarious and insightful graphic novel from a very talented and funny new voice.

“Woman World is an overdue, welcome and slyly hilarious glimpse into the complex, heartfelt, and existential bonds between women of all stripes and makes. Each scene reminded me of the wild paradox of wanting to do good in the world, but also being undeniably human. I couldn't get enough.”—Aparna Nancherla

“Turns out a world without men is very funny.”—Tig Notaro

“One of the most remarkable, funny, compassionate, acerbic, hilarious comics of its day.”—Boing Boing Holiday Gift Guide

“A remarkably sly and devastating critique of patriarchy.”—NPR

“Gentle, hilarious and arguably a far better world than the one we currently have.”—The Hollywood Reporter

“Woman World continues the science fiction tradition of futurekind discussing our society’s silliness, but with cleverness and warmth… I laughed a lot.”—Toronto Star

"Women’s creativity, sexuality, and fearlessness are unleashed by Dhaliwal’s end of days. These unlikely heroines are unafraid to meet Armageddon with irreverence as they laugh, love, and raucously live on in this unusual and charming farce."—Publishers Weekly

Aminder Dhaliwal is a native of Brampton, Ontario and received a Bachelors of Animation from Sheridan College. She now lives in Los Angeles, where she is the Director at Disney TV Animation. Previously, she worked as a Storyboard Director at Cartoon Network and Storyboard Director on the Nickelodeon show Sanjay and Craig. She has serialized Woman World biweekly on instagram since March 2017 and has garnered more than 120,000 followers. Woman World was nominated for an Ignatz Award for Outstanding Online Comic.
Loading...
or support indie stores by buying on