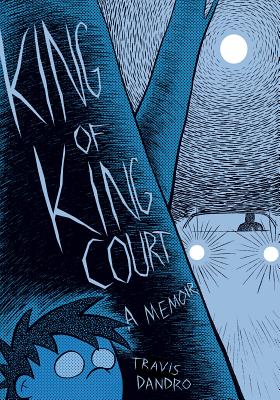 From a child’s-eye view, Travis Dandro recounts growing up with a drug-addicted birth father, alcoholic step-dad, and overwhelmed mother. As a kid, Dandro would temper the everyday tension with flights of fancy, finding refuge in toys and animals and insects rather than in the unpredictable adults around him. He perceptively details the effects of poverty and addiction on a family while maintaining a child’s innocence for as long as he can.

King of King Court spans from Travis’s early childhood through his teen years, focusing not only on the obviously abusive actions but also on the daily slights and snubs that further strain relations between him and his parents. Alongside his birth father committing crimes and shooting up, King of King Court lingers on scenes of him criticizing Travis and his siblings. Dandro gives equal heft to these anecdotes, emphasizing how damaging even relatively slight traumas can be to a child’s worldview.

As Travis matures into young adulthood and begins to understand the forces shaping his father’s toxic behaviors, the story becomes even more nuanced. Travis is empathetic to his father’s own tragic history but unable to escape the cycle of misconduct and reprisals. King of King Court is a revelatory autobiography that examines trauma, addiction, and familial relations in a unique and sensitive way.


Praise For King of King Court…

“This is a powerful debut, skilfully drawn, cleverly told and as raw as a wasp sting.”—The Guardian

“Travis Dandro has elevated the graphic memoir form. [King of King Court] captures the complexity of the abusive scene — the troubling dissonance that someone can make you laugh and feel loved, and also be a source of terror and pain, a waking manifestation of nightmare.”—Boston Globe

“As an illustrator, Dandro has a gift for the cinematic.”—Times Literary Supplement

“An extended poetic gaze on intergenerational helplessness and the violence it begets... Dandro expertly balances a child’s-eye view with authorial empathy. This gloriously scribbled story doesn’t rest on easy morals, or even attempt to forgive the past—Dandro’s triumph is drawing the reader through both the pain and beauty of his upbringing, and then moving forward.”—Publishers Weekly, starred review

“It’s a rare memoir that immediately engages and builds a story of family dysfunction that is as startling and heartbreaking as it is imaginative.”—School Library Journal, starred review

“Inventive... A visually engaging and human story of early trauma and how art and the imagination persist through the toughest of times.”—Library Journal

“King of King Court uses patient, sustained scenes, to conjure the way in which the euphoria and terror of childhood get tangled together.”—Lit Hub

“What is striking is how Dandro continually deepens and complicates our understanding of the lives we are being shown. He manages to offer empathy to all the people in his life, even the ones he hates.”—The Scotland Herald

“[King of King Court is] a trip down a bumpy memory lane, one that winds through Travis Dandro’s life from age 6 to 16 and contemplates the ways in which love, anger and loneliness collide. Dandro’s art is expressive, his storylines often impressionistic. Kinetic dream sequences feel whimsical yet enlightening, dark shadows reveal even as they conceal, and scenes of kids making mischief are unquestionably cute.”—Bookpage
“The pace of the book is always crucial in comics, and this one, focused throughout on images more than words, is a page-turner in the best way, even if the subject matter isn’t an easy read.”—The Toronto Star

“King of King Court is an excellent reminder of how evocatively effective comics are in the hands of a skilled memoirist.”—Pop Matters

“Viewed through the innocent eyes of childhood and those of a world-weary young adult, this is a tough but illuminating read.”—Booklist

“Travis Dandro’s gripping comic memoir recounts a childhood shaped by addiction and abuse... As Dandro grows to adulthood, he comes to a greater understanding of the roots of his family’s damaging and toxic behaviors, and the book becomes not just an exploration of abuse but a nuanced and sensitive look at a troubled family.”—Barnes & Noble Blog

Travis Dandro was born in 1974 in Leicester, Massachusetts. He started publishing his first comic strip, Twerp, in the local newspaper when he was thirteen, earning $15 a week. After graduating from Montserrat College of Art in 1996, he continued drawing comics, his work appearing in dozens of college newspapers across the United States and Canada. He also self-published Journal, which was cited as a notable comic in the 2010 and 2012 editions of The Best American Comics. King of King Court is his first graphic novel. Dandro lives in Maine with his wife and three sons.
Loading...
or
Not Currently Available for Direct Purchase