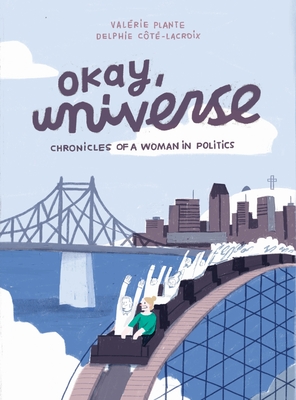 Chronicles of a Woman in Politics

A story about political organizing and the power of community

Valérie Plante stood up to the patriarchal power system of her city, took down an incumbent, and became the first woman elected Mayor of Montreal. Her origin story comes alive in Okay, Universe. This captivating graphic novel—created in a true collaboration with Governor-General Award-winner Delphie Côté-Lacroix—follows her journey from community organizer and volunteer to municipal candidate, and the phone call from the local social justice political party that changed her life forever.

Okay, Universe is the first time Plante has told her story, and she has chosen an art form that is not just emblematic of the city of Montreal and its love of the arts and bande dessinée, it’s an art form that is accessible to all readers and perfectly suited to her message. With patience, determination, and the strength of will to remain true to her core beliefs, Okay, Universe details the inspiring political campaign where slowly but surely she gained the trust of a neighbourhood fighting for affordable housing, environmental protections, and equal opportunities. Okay, Universe demystifies the path to success, simultaneously showing the Mayor’s inextinguishable commitment to creating positive change in the world and educating about the vitality of political engagement.


Praise For Okay, Universe: Chronicles of a Woman in Politics…

"Ideal for an aspiring young politico, this graphic memoir anatomizes the grit and idealism that helped Plante become Montreal’s first female mayor. Côté-Lacroix’s illustrations detail both Plante’s ground game in her first election and the moments she looks to the universe for guidance – hence the book’s title."
—Globe and Mail, Best Books of 2020

"Côté-Lacroix’s bright painted art, blocking out Montreal and its people in bold shapes and colors, complements Plante’s optimism. This inviting and accessible blueprint will appeal to anyone, but will particularly resonate with women who are keen to get involved in politics." —Publishers Weekly

"Anyone new to the world of politics will face a myriad of challenges, but women face issues that men do not... this story is a reminder that the race can be worth running." —Canadian Review of Materials

"Okay, universe, I’m ready for a new challenge!' is what [Valérie Plante] says to the sky on the night she makes her commitment. It’s hard to imagine that many who read Okay, Universe, especially the girls and young women who are the book’s truest spiritual constituency, won’t come away feeling just as determined."
—Montreal Gazette

"[Okay, Universe] follows the challenges faced by the fictional Simone Simoneau in her run for city council, both as a first-time politician and a female enduring the kind of systemic gender biases that discourage women from entering the political arena at all... Plante hopes that her story – or, Simone Simoneau’s story – inspires others to follow in her footsteps." —Quill & Quire

"Okay, Universe is the story of one woman’s sojourn into the male-centric world of politics [as well as] an uplifting, inspiring story that doesn’t hit the reader over the head with any over-the-top ideological ranting."
—London Free Press

"Okay, Universe provides understanding of the behind-the-scenes work in politics. Often people will picture candidates giving speeches to big crowds waving posters. This may be part of it, but the real work is talking one-on-one with people and finding funds." —BlogCritics

"A friendly, helpful, realistic portrayal of an actual first-time political campaign ... The world could use more constructive books that encourage participation in local politics rather than scare people away and that’s what happens here." —Comics Beat

"This is a quiet story, and the color palette – secondary colors of light violet, light green, light orange and gray – complement the calm tone. Unframed panels show many views of Montreal and Simone’s family life. Many of these passages show street views as Simone commutes to work on her bicycle, as well as... personal moments in her day." —Youth Services Book Review

Born in Rouyn-Noranda, Valérie Plante studied anthropology and museology and worked in the cultural and community sectors before becoming a leading figure in Quebec’s political arena. After a successful run for city council Montreal’s Ville-Marie district in 2013, she made history in 2017 as the first woman elected mayor of Montreal. Her initiatives center around the vision of a city on a human scale, devoted to quality of life for all. Through the character of Simone Simoneau, she explores the highs and lows of those who venture off the beaten path.

Delphie Côté-Lacroix discovered her love of illustration while studying graphic design in Sherbrooke, Quebec. She continued her artistic studies at Concordia University’s Faculty of Fine Arts. In 2019, she won a Governor General’s Literary Award for her illustration of Jack et le temps perdu, a collaboration with Stéphanie Lapointe. With the comics form, Delphie discovered the perfect means to demystify the world of politics and make Valérie’s inspiring story accessible to all.