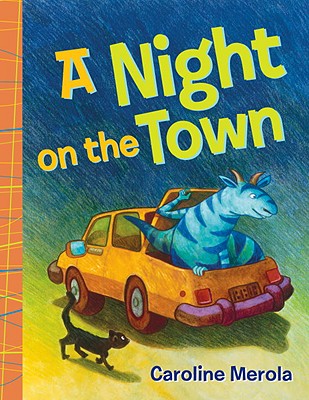 A Night on the Town

Pickles McPhee has always longed for adventure, and when the chance presents itself to run away to the Big City, this blue-striped monster grabs it. She's in awe of the lights, but the fun really begins when she finds a companion to show her around. Together, they visit the park, the swimming pool, and even a candy store. But the store's closed for the night. When Pickles inadvertently becomes a burglar, the jig is up and the adventure is over. For the time being.

Originally published in French as Une nuit en ville, A Night on the Town is about the sheer joy of exploring the new, whether it's a familiar playground seen in the moonlight, or a friend who is an improbable shade of blue.

CAROLINE MEROLA has a degree in fine arts from Concordia University. She worked as an illustrator for several publishing houses and her work has appeared across North America. Caroline Merola writes and illustrates children's books and has more than thirty titles to her credit. She was a finalist for the Mr. Christie Book Award, and, in both 2007 and 2008, was a finalist for the Governor General's Literary Award for Children's Illustration.
Loading...
or
Not Currently Available for Direct Purchase