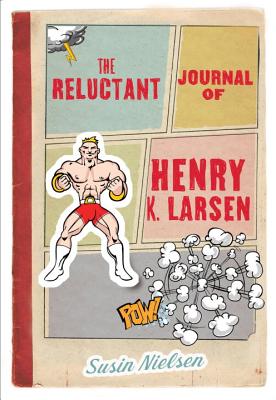 Darker than her previous novels, Susin peoples this novel about the ultimate cost of bullying with a cast of fabulous characters, dark humour, and a lovable, difficult protagonist struggling to come to terms with the horrible crime his brother has committed.


Praise For The Reluctant Journal of Henry K. Larsen…

PRAISE FOR The Reluctant Journal of Henry K. Larsen:

". . . With fully developed adult and child characters and a solid sense of middle school humor, the author has crafted an insightful and nuanced novel about bullying and suicide, and familial love and resilience." --Starred Review, School Library Journal

". . . a highly emotional story about a family that blames one another, and themselves, for an unimaginable tragedy. Nielsen’s balance of humor and pathos is finely honed, making this a surprisingly breezy read for so heavy a topic." --Booklist

". . . A realistic, poignant portrait of one teen who overcomes nearly unbearable feelings of grief and guilt." --Kirkus Reviews

"The Reluctant Journal of Henry K. Larsen by Susin Nielsen is an engaging grief story. Thought-provoking and relevant, it addresses the effects of bullying in a realistic, compelling and compassionate way, exemplifying the adage ‘There are two sides to every story.’ Henry’s journey is moving and weirdly, wildly funny." --Jury’s Citation, Governor General’s Literary Award in Children’s Text

". . .Words and writing are often a salvation in Nielsen’s YA fiction. Henry is forced to keep a journal by his therapist; he is at first reluctant, then obsessive about it. A born diarist, he exhibits the idiosyncratic voice of a memoirist, one keenly interested in documenting both his inner and outer worlds. He captures both with humour and heart. . . . Yet the novel is a dramedy, and believably balances lightness and darkness. It is a shame when the reader must put down the journal and say goodbye to Henry." --The National Post

"Nielsen treats a heavy subject with a light, optimistic touch, and while Henry’s passion and distress are evident, his wacky commitment to ‘Saturday Night Smash-up’ and his own ironic, yet earnest, perspective leavens the serious subject matter." --The Toronto Star

". . . Henry’s is a tough story to read and I can only imagine how hard it was to write it. But it’s one that really needs to be heard. And honestly, I couldn’t have pictured anyone but Nielsen telling it." --Lavender Lines

SUSIN NIELSEN got her start writing a spec script for the popular television series Degrassi Junior High. She went on to pen sixteen episodes of the hit television show and four of the Degrassi books. Since then, she has received two Canadian Screenwriter Awards and a Gemini Award and has written for many home-grown TV series. Her novel Word Nerd, published to much critical acclaim, was a finalist for the TD Canadian Children's Book Award and won the Red Maple, Rocky Mountain, Willow, and Manitoba Young Readers' Choice Awards. This was soon followed by the hilarious and heartwarming Dear George Clooney, Please Marry My Mom, which has received rave reviews and has already been translated into French, Portuguese and German. Susin Nielsen lives in Vancouver, British Columbia.