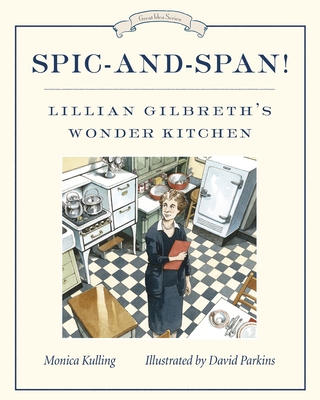 Born into a life of privilege in 1878, Lillian Moller Gilbreth put her pampered life aside for one of adventure and challenge. She and her husband, Frank, became efficiency experts by studying the actions of factory workers. They ran their home efficiently, too. When Frank suddenly died, Lillian was left to her own devices to raise their eleven children. Eventually, she was hired by the Brooklyn Borough Gas Company to improve kitchen design, which was only the beginning.
Lillian Gilbreth was the subject of two movies (Cheaper by the Dozen and Belles on Their Toes), the first woman elected to the National Academy of Engineering, and the first female psychologist to have a U.S. postage stamp issued in her honor. A leading efficiency expert, she was also an industrial engineer, a psycologist, an author, a professor, and an inventor.


“Kulling deftly describes early twentieth-century social, physical, and technical conditions that presented challenges to productivity in both public and private settings, and she explains how Gilbreth’s innovations improved conditions, creating context so that young readers can appreciate the extent of her contributions. Parkins’ rich, cartoon-like illustrations provide clear period detail, and his characters’ faces portray an extensive range of emotions, adding interest and emphasizing Gilbreth’s primary commitment to her family.” - Booklist


“Readers’ appetites are whetted to read further about this woman [Lillian Gilbreth] .... [David Parkins] charms readers with pen and ink drawings combined with water colour. The plentiful illustrations, with their expressive figures and sense of proportion, are full of life and vigor. They enrich and enhance the text with their vibrancy and detail. It is such a pleasure to pore over them." - CM Magazine

Monica Kulling is a poet who has published over forty books for children, including picture books, adaptations of classic novels, and biographies. Known for introducing biography to children who are just learning to read, she has written about Harriet Tubman, Henry Ford, Houdini, Eleanor Roosevelt, and Amelia Earhart, among others. Her award-winning Great Idea Series features biographies of inventors and their captivating inventions. She is also the author of the hilarious Merci Mister Dash! and Mister Dash and the Cupcake Calamity. Visit her website at www.monicakulling.ca.

David Parkins is an award-winning illustrator of more than fifty books for children. After studying wildlife illustration in Wales and general illustration at the Lincoln College of Art, he became a freelance illustrator whose work has appeared in The Guardian, the Toronto Star, Bloomberg Business Week, Nature, The Economist, and in the British children's comic The Beano. He does a regular editorial cartoon for the Globe and Mail and is the critically acclaimed illustrator of two other books in Monica Kulling's Great Idea Series: In the Bag! Margaret Knight Wraps It Up, shortlisted for the 2013 Governor General's Literary Award in Children's Illustration, and Going Up! Elisha Otis's Trip to the Top.
Loading...
or
Not Currently Available for Direct Purchase