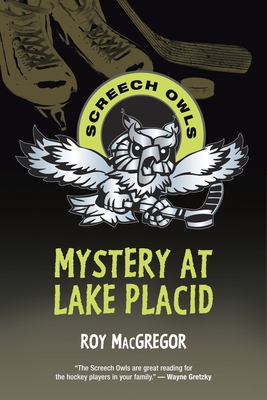 Travis Lindsay, his best friend, Nish, and all their pals on the Screech Owls hockey team, are on their way to New York for an international peewee tournament. Excitement builds in the team van on the way to Lake Placid. First there are the entertaining antics of their trainer, Mr. Dillinger - then there's the prospect of playing on an Olympic rink, in a huge arena, knowing there will be scouts in the stands.

But they have barely arrived when things start to go wrong. Their star center, Sarah, plays badly from lack of sleep. Next Travis gets knocked down in the street. And then someone starts tampering with equipment. It looks as if someone is trying to sabotage the Screech Owls. But who? And why? And can Travis and the others stop the destruction before the decisive game of the tournament?

Roy MacGregor is the author of Home Team: Fathers, Sons and Hockey (shortlisted for the Governor General's Literary Award); A Life in the Bush (winner of the U.S. Rutstrum Award for Best Wilderness Book and the CAA Award for Biography); and Canadians: A Portrait of a Country and Its People, as well as two novels, Canoe Lake and The Last Season. A regular columnist at The Globe and Mail since 2002, MacGregor's journalism has garnered four National Magazine Awards and eight National Newspaper Award nominations. He is an Officer of the Order of Canada, and was described in the citation as one of Canada's "most gifted storytellers." He lives in Kanata.
Loading...
or support indie stores by buying on
(This book is on backorder)