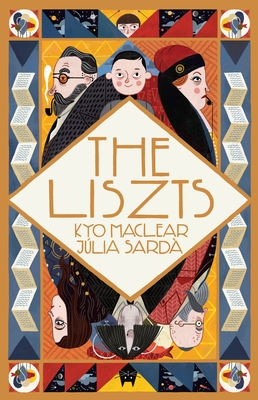 The Liszts make lists. They make lists most usual and lists most unusual. They make lists in winter, spring, summer and fall. They make lists every day except Sundays, which are listless. Mama Liszt, Papa Liszt, Winifred, Edward, Frederick and Grandpa make lists all day long. So does their cat. Then one day a visitor arrives. He's not on anyone's list. Will the Liszts be able to make room on their lists for this new visitor? How will they handle something unexpected arising? Kyo Maclear's quirky, whimsical story, perfectly brought to life with the witty, stylish illustrations of Júlia Sardà, is a humorous and poignant celebration of spontaneity.

Praise For The Liszts…

PRAISE FOR The Liszts:

"The joy shared by Edward and the visitor lifts the story out of its velvet-draped languor." --Publishers Weekly

"An entirely unique book, ideal for one-on-one sharing, with rich illustrations and a quaint story worth poring over." --School Library Journal

"Text and art beautifully combine to draw the reader in to revel not only in artifacts and lavish detail, but the wide-open spaces of the unknown." --Quill & Quire

"…the offbeat, eye-catching illustrations will lure in many to this sophisticated, darkly humorous tale." --Booklist

"In a time when information is increasingly available as point-form snippets, The Liszts is a reminder to explore the world and find joy in its crazy unpredictability." --National Reading Campaign

"…a lyrical, whimsical and wonderfully-written tale featuring beautiful artwork that will keep kids turning the pages, if not turn them back again for the almost gothic look of the Liszt’s colorful world." --Paradise Bound

"[A] humorous and poignant celebration of spontaneity." --49th Shelf (blog)

KYO MACLEAR is a critically acclaimed, award-winning author for big people and little people. Her previous picture books for children include The Good Little Book; Julia, Child; The Specific Ocean; Mr. Flux; Spork; and Virginia Wolf, which won the Governor General's Literary Award for Illustration, Canada's most prestigious children's book prize. The Letter Opener, her first novel for adults, won the K.M. Hunter Artists Award and was shortlisted for the Amazon.ca Books in Canada First Novel Award. Her most recent novel, Stray Love, appeared on several notable "Best of 2012" lists. She lives in Toronto with singer and composer David Wall and their two children. The author lives in Toronto, Ontario.
Loading...
or
Not Currently Available for Direct Purchase