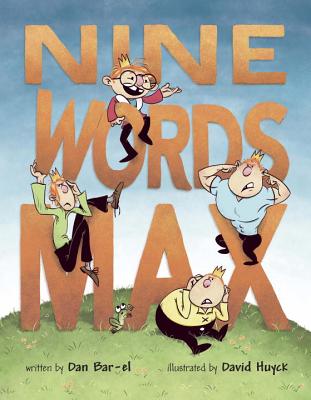 Maximilian is a prince who loves to talk: No topic is too small, no story too boring. Max's brothers are the opposite--the less said the better. When the king and queen go on a trip and leave the brothers alone, the 3 princes put a spell on Max that limits him to speaking only 9 words at a time. The brothers are delighted: peace and quiet at last! But when a fearsome dignitary arrives, they realize the true value of their brother's insatiable need for information. A cautionary tale and a tongue-in-cheek tribute to trivia buffs, Nine Words Max is also a sly satire of our modern world's obsession with media--the 3 reticent princes spend a lot of time sending silly messages, lying around watching puppet shows and speaking in 140 characters or less... This book is a funny, quirky and madcap tale with fantastic illustrations from illustrator David Huyck.

DAN BAR-EL is an award-winning children's author, educator and storyteller. His writing includes chapter books, picture books, and most recently, a graphic novel. For the past twenty years, Dan has been working with children ages 3 to 13. He's been a school age childcare provider, a preschool teacher, a creative drama teacher and creative writing teacher. These days, when not writing, travelling around the country presenting his book, storytelling or leading various workshops at schools and libraries, he teaches creative writing courses to children with the organization CWC. Dan lives in Vancouver, BC and shares his life with artist and goldsmith, Dominique Bréchault, and Sasha, the most adorable cat in the known universe. Like Maximilion, Dan is not a man of few words, but no one has had to put a spell on him... yet.

David Huyck grew up outside the kingdom of Chicago where he watched gobs of puppet shows, but they were mostly on TV. He lived half a block from the candy store in one direction, and half a block from the playground in the other. Along with a limitless supply of Legos, cartoons and all genres of books, the resulting high-fructose queasiness is the point-source for everything he has made ever since. In addition to his award-winning illustrations, David is known as proprietor of the collaborative print project, Cloudy Collection, and he is a contributing editor for the popular Drawn! illustration and cartooning blog. The first book he illustrated is That One Spooky Night, also written by Dan Bar-el. He always keeps a pencil handy so he can capture hiding frogs and silly faces on paper. David lives with his family in Moscow, ID. You can find him online at http://davidhuyck.com/
Loading...
or
Not Currently Available for Direct Purchase