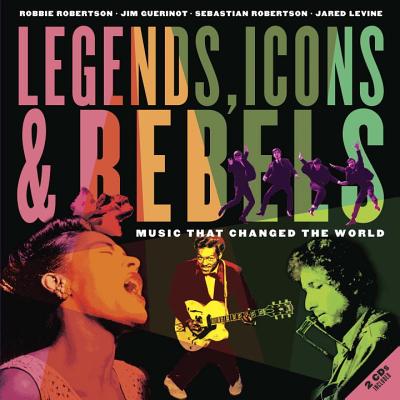 Music That Changed the World

Exclusive insights from a celebrated musician and passionate industry insiders, two accompanying CDs of legendary tracks and beautiful packaging make for a book with broad appeal -- one that will captivate fans of Robbie Robertson and music lovers of all ages.

Part memoir, part tribute, and all great storytelling ...
Music industry veterans Robbie Robertson, Jim Guerinot, Jared Levine, and Sebastian Robertson invite young readers to share with them in celebrating twenty-seven musical legends. Short profiles chronicle personal stories and achievements of extraordinarily talented artists whose innovations changed the landscape of music for generations to come. Carefully compiled like any great playlist, the line-up features originators, rebels, and risk-takers across diverse genres. From Ray Charles to Johnny Cash, Chuck Berry to Bob Dylan, Robertson shares anecdotes about these artists and the influence they had on his own musical journey.

Always respectful of their reader, the writers never shy away from speaking about the difficult challenges these recording artists faced and the very human foibles that sometimes led to their tragic end. Most of all, it's the authors' passion and insights into these personal stories of creativity and collaboration -- and the power of music to shine a light on injustice and foster change -- that will fascinate, enlighten, and inspire music fans of all ages.”Exclusive insights from a celebrated musician and passionate industry insiders, two accompanying CDs of legendary tracks and beautiful packaging make for a book with broad appeal -- one that will captivate fans of Robbie Robertson and music lovers of all ages.


Praise For Legends, Icons & Rebels: Music That Changed the World…

“Wow, just wow! This book is big in every way…. The book’s art is hard to resist … it’s a treat that the words grab as much as the pictures.”
—Starred Review, Booklist

“Art, factoids and personal reflections introduce 27 carefully selected and thoughtfully presented musicians. . . . Each profile opens with a two-page spread of stunning original artwork and a recollection from lead author Robertson . . . the conversational tone of the writing and visually alluring layout will quickly capture the attention. . . . A compelling introduction to the ancestors of modern popular music.”
— Kirkus Reviews

Robbie Robertson is himself a musical legend. He has won a Grammy Lifetime Achievement Award and is a Rock and Roll Hall of Fame Inductee. He was the primary songwriter for the critically acclaimed group The Band, penning Americana classics like "The Weight" and "Up on Cripple Creek" and toured with Bob Dylan. After The Band bid farewell to performing in The Last Waltz concert, filmed by Martin Scorsese, Robertson followed his long-time fascination with film. He was a Creative Executive at DreamWorks and has scored and/or been an executive music producer on a number of Martin Scorsese's films. He has also acted in and written and produced other major motion pictures.
Jim Guerinot owns and runs Rebel Waltz Management. He manages a client roster that includes No Doubt, Gwen Stefani, The Offspring, Nine Inch Nails, Trent Reznor, and Robbie Robertson. In addition to band management, Guerinot was the General Manager and the Sr. Vice-President of Marketing at A&M Records, supervising the Marketing, Promotion, Sales, Publicity, and Creative Services departments. His influence figured in the development and success of such A&M acts as Soundgarden, Sheryl Crow, and Blues Traveler. Guerinot is also the owner of indie label Time Bomb Records.
Jared Levine played in bands throughout college. After, he moved to Los Angeles where he was hired by Geffen Records to coordinate the Robbie Robertson record Storyville. Since then Jared has worked in the music business as an artist manager and A&R man. He has managed such artists as Robbie Robertson and Fishbone, and has signed artists including Cracker, Soul Asylum, and Gin Blossoms.
Music has always been central to Sebastian Robertson's life. He has played in several bands and appeared on the album Music For The Native Americans. He has composed over 3,000 pieces of music in television and film. He also served as the musical director on the acclaimed documentary series Playing For Change. Sebastian is currently writing a number of children's books and is developing a cable television series. The author lives in California, USA.