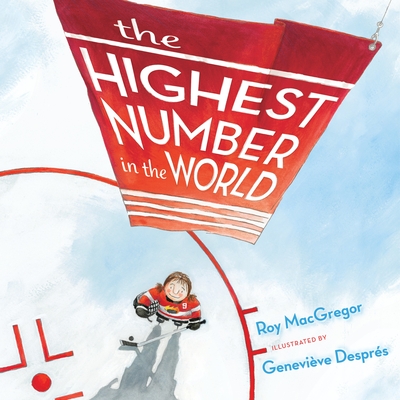 The Highest Number in the World

9-year-old Gabe (Gabriella) Murray lives and breathes hockey. She's the youngest player on her new team, she has a nifty move that her teammates call "the Gabe," and she shares a lucky number with her hero, Hayley Wickenheiser: number 22. But when her coach hands out the team jerseys, Gabe is stuck with number 9. Crushed, Gabe wants to give up hockey altogether. How can she play without her lucky number? Gabe's grandmother soon sets her straight, though--from her own connection to the number 9 in her hockey-playing days to all the greats she cheered for who wore it, she soon convinces Gabe that this new number might not be so bad after all.

A lovely intergenerational tale and a history of the storied number 9 in hockey, The Highest Number in the World is a must-have for any hockey fan.

Praise For The Highest Number in the World…

“From the moment Grandma begins to share her past and her passion for hockey, the story’s context becomes broader, more complex, and more meaningful. A memorable, intergenerational picture book perfect for sharing.”
—Booklist

ROY MACGREGOR is the author of many hockey literature classics such as Home Team: Fathers, Sons and Hockey, Home Game, The 7 A.M Practice and the Screech Owls series. He was named a media inductee to the Hockey Hall of Fame in 2013, when he was given the Elmer Ferguson Award for excellence in hockey journalism. He has been involved in hockey all his life, from playing all-star hockey in Huntsville, Ontario, against the likes of Bobby Orr from nearby Parry Sound, to coaching, and he still plays hockey in Ottawa where he lives with his wife Ellen. They have four grown children. Roy was inspired to write The Highest Number in the World when his now grown-up daughter starting playing hockey as a young girl. His lucky number is 13.

Geneviève Després completed a degree in Industrial Design at the Université de Montréal, but decided instead to pursue her first passion: drawing. She turned to illustration, and worked in the fields of educational publishing, advertising, editorial, and children's literature. She then spent a few years in Europe, where she looked for inspiration and explored different techniques. Since her return to Quebec she has illustrated many books for children, including Le petit chevalier qui n'aimait pas la pluie and La grève du bain. As a young girl, Geneviève was very athletic and always picked first for school yard games--even before the boys! She still plays sports whenever she gets the chance, including Ultimate Frisbee, and competes in triathlons. She didn't get to play hockey because girls weren't offered the opportunity, but she cheers for all three of her boys (including her husband) who play. Geneviève lives in Saint-Lambert on the south shore of Montreal with her family.
Loading...
or
Not Currently Available for Direct Purchase