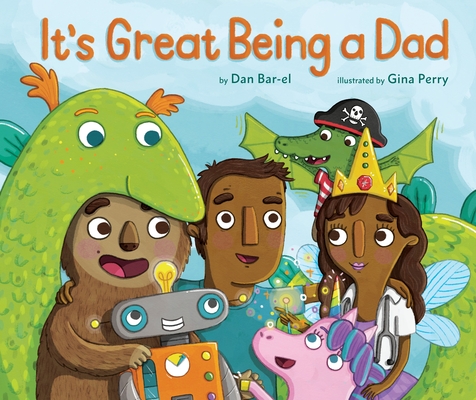 It's Great Being a Dad

A celebration of the best kind of dad: the kind that's willing to join in the fun.


A gang of mythical creatures is roaming around a magical land having a great time, until Bigfoot gets his foot stuck in a tree trunk and Unicorn gets her horn impaled on a table and Robot's saw-arm gets rusted into position. But have no fear! Dad is there to fix things--even when a Sneaky Flying Alligator Pirate steals the Fairy Queen Ballerina Doctor's wand.

A hilarious story about imagination, play and the best parts about being a dad.

Praise For It's Great Being a Dad…

PRAISE FOR It's Great Being a Dad:

"[A] very different kind of celebration of Father's Day: one which revolves around a unicorn, a ballerina, and a helpful father . . . A zany set of encounters challenges even this special father in a fun story with unpredictable characters and dilemmas." --Midwest Book Review

"The imaginations of our children are as diverse as their personalities. Whether they’re unicorns, Bigfoot, robots or fairy queen doctors, they all need rescuing from time to time. And the greatest one in the land, who comes to save the day, is Dad! Who wouldn’t want to be a dad?" --Story Monsters Ink Magazine

"Move aside Wilbur and Babe. There's a new farmyard hero in town, and she has no desire to end up hamburger . . . Part Great Escape, part Hatchet, part Charlotte's Web, all wonderful." --Starred Review, Kirkus Reviews

"[P]urely delightful . . . At its heart, Audrey (Cow) encourages kids to think even as it entertains - the mark of wonderful children's literature." --Starred Review, Quill & Quire

"This is no simple farm story; it is a powerful tale that takes a philosophical stance against today's meat industry . . . A unique approach to a sensitive topic." --Starred Review, School Library Journal

DAN BAR-EL is an award-winning children's author, educator and storyteller who has published chapter books, picture books, and graphic novels.Over the past twenty-one years, he has worked with children ages 3 to 13 as a school age childcare provider, a preschool teacher, a creative drama and a creative writing teacher. Dan lives in Vancouver with Dominique, and Sasha, the best cat in the known universe.

GINA PERRY graduated from Syracuse University, worked as a compositor in animation, and as an art director creating products for the scrapbooking market.Today she lives, works, and raises a family in New Hampshire, where trees are the tallest obstacles to the sea. She likes yarn and table tennis.
Loading...
or
Not Currently Available for Direct Purchase