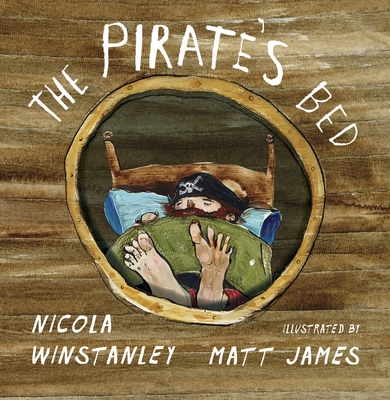 A pirate is sleeping snug in his bed, dreaming pirate dreams, when a great storm comes up at sea. The pirate sleeps on, but his bed is awake and scared of the thunder and the angry waves. Tossed this way and that, the ship finally crashes, sending the pirate to a tropical island and his bed off to sea.
At first, the bed is overjoyed. It's free from smelly feet, snoring and scratchy wool. It floats in the now peaceful water, meeting friendly gulls and playful dolphins and basking in the sun. But soon the little bed begins to feel like something is missing...
This fanciful tale of a bed lost at sea will capture the hearts of little pirates everywhere and send them off to sleep with dreams of tropical birds, swooshing waves and chattering monkeys.

Praise For The Pirate's Bed…

“What sets The Pirate's Bed apart from other tales of its ilk is the main character - the bed itself .... James also has an impressive ability to convey the emotional journey of the secret-laden bed, especially through its bedpost eyes. This unique viewpoint, both in narrative and art, makes The Pirate's Bed charming and memorable.” - Quill & Quire

Nicola Winstanley has always believed in the power of stories to bring comfort. So when her toddler Sam started making nighttime travels, she would tuck him back under his covers and tell him a story that let him know how much his bed needed him. (Now bed is his favorite place and she can't get him up in the morning, but he still loves stories... ) Nicola's previous book, Cinnamon Baby, won an honor prize for the Ezra Jack Keats New Writer award and was shortlisted for the Marilyn Baillie Picture Book award.

Matt James is a painter, illustrator and musician. His books have won many prestigious awards, including the Boston Globe-Horn Book Award, the Marilyn Baillie Picture Book Award, the New Mexico Book Award and the Governor General's Award. Matt lives in Toronto with his family.
Loading...
or
Not Currently Available for Direct Purchase