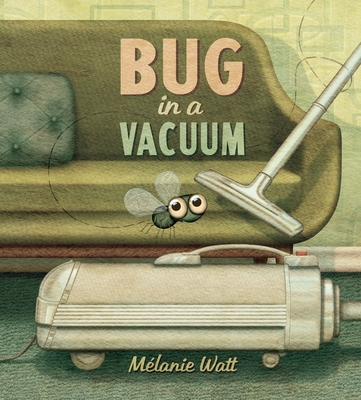 Bug in a Vacuum

A bug flies through an open door into a house, through a bathroom, across a kitchen and bedroom and into a living room ... where its entire life changes with the switch of a button. Sucked into the void of a vacuum bag, this one little bug moves through denial, bargaining, anger, despair and eventually acceptance -- the five stages of grief -- as it comes to terms with its fate. Will there be a light at the end of the tunnel? Will there be dust bunnies in the void? A funny, suspenseful and poignant look at the travails of a bug trapped in a vacuum.

Praise For Bug in a Vacuum…

“A bug flies indoors, is sucked into a vacuum, and experiences the five stages of grief while entrapped. The narrative plays it straight, but the double-page spreads—over 40 of them—tell a far livelier story .... [Watt] includes a clever, visually parallel story about the household's dachshund, whose favorite toy, a knitted, button-eyed dog, suffers the same fate as the bug .... Another funny, visually rollicking work from the creator of Chester and Scaredy Squirrel." - Kirkus Reviews


“The double-page artwork cleverly illustrates these traumatic events with a muted palette and cute, cartoony characters. Much of the humor is tongue-in-cheek. There is plenty of detail in the illustrations that will evoke adult chuckles and encourage children to look closer .... The award-winning author of the “Scaredy Squirrel” series (Kids Can) is back with an equally engaging, if a bit more sophisticated, picture book to delight audiences.” - School Library Journal


“In a story heady and intellectually ambitious enough for a jaded adult, yet suited to a child’s down-to-earth appetites, a wide-eyed fly gets vacuumed up .... There’s a journey, yes, into the light, but it’s a happy ending that may just prompt sheer joy at the simple fact of being alive.” - The New York Times


“This book is so eloquently written and illustrated, so carefully and tenderly crafted. . . Highly recommended.” - The Globe and Mail

Mélanie Watt is the bestselling creative genius behind many beloved picture books for children, including the Scaredy Squirrel series, the Chester series, You're Finally Here!, Have I Got a Book for You! and Augustine. Mélanie's books have received numerous starred reviews from journals such as PW and Kirkus and have won many state awards in the US, including the Virginia Readers' Choice Award, North Carolina's Children's Book Award and Maryland's Black-Eyed Susan Award. In Canada, she is a multiple winner of the OLA's Blue Spruce Award and the Ruth & Sylvia Schwartz Children's Book Award. The Scaredy Squirrel animated television series based on her books airs on the Cartoon Network in the US and YTV in Canada. Mélanie lives in Montreal, Quebec.