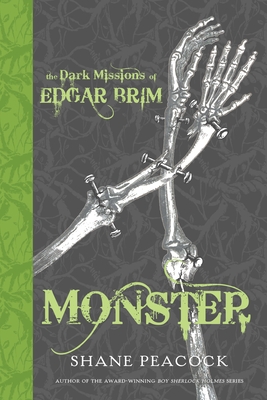 The Dark Missions of Edgar Brim

The pulse-pounding second book in a gripping gothic trilogy, featuring monsters from classic literary tales, secret societies and the fight between good and evil.

After vanquishing the terrible creature that stalked the aisles of the Royal Lyceum Theatre, Edgar Brim and his unusual crew of friends return to their mentor only to discover that he has been brutally murdered by an unknown assailant. The group go into hiding, Edgar desperate to protect his friends and family from what may be a second horrific creature torn from the pages of literature. Meanwhile, Edgar's guardian, Alfred Thorne, forces him to pursue a trade, and so Edgar begins working with his uncle, Doctor Vincent Brim, and a renowned vivisectionist, the brilliant yet mysterious Doctor Godwin. The more time Edgar spends in the company of Godwin, the more he begins to wonder about Godwin's motives. And time is running out for Edgar and his friends. A monstrous creature is chasing them, a beast seemingly impervious to Thorne's weaponry. Can Edgar Brim once again defy the horrors that pursue him, and protect those dearest to his heart?

Praise For The Dark Missions of Edgar Brim: Monster…

PRAISE FOR The Dark Mission of Edgar Brim: Monster:

"In this sequel to The Dark Missions of Edgar Brim, Shane Peacock once again takes us on a riveting journey into 19th-century England. . . . This would be the perfect novel to accompany a study of Gothic literature as Peacock adeptly weaves details from Poe's, Shelley's, Stoker's and Wells' works into his own." --Highly Recommended, Canadian Children's Book News

“Strong secondary characters and a gritty, foggy London all add up to an extremely enjoyable addition to this series.” --CM Reviews

SHANE PEACOCK was born in Thunder Bay, Ontario, and grew up in Kapuskasing. A biographer, journalist and screenwriter, he is also the author of several novels and plays. He has received many honors for his writing, including the prestigious Arthur Ellis Award for Eye of the Crow and Becoming Holmes and the Geoffrey Bilson Award for Historical Fiction for Vanishing Girl, all titles in his Boy Sherlock Holmes series. Shane Peacock lives with his wife and three children near Cobourg, Ontario. Visit him at his website: www.shanepeacock.ca and follow him on twitter: @Shane_Author
Loading...
or
Not Currently Available for Direct Purchase