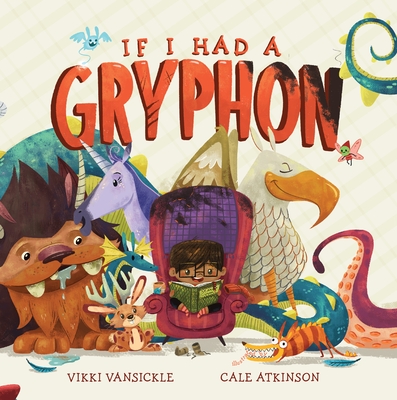 If I Had a Gryphon

Sam just got a hamster for a pet. But the hamster is kind of boring ... he just eats and sleeps and gets his shavings wet. Inspired by her book of mythological creatures, Sam longs for a more exciting pet. But she soon realizes that taking care of these magical beasts might not be as wonderful as she thought. Sasquatches are messy, unicorns are shy, hippogriffs scare the dogs at the dogpark, and having a fire extinguisher handy at all times makes dragons seem like an awful lot of work. In the end, Sam realizes that her hamster is a pretty sweet and safe pet ... or is he?
If I Had a Gryphon is a raucous rhyming read-aloud about fantastical beasts in everyday situations--and the increasingly beleaguered heroine who has to deal with them.


Praise For If I Had a Gryphon…

PRAISE FOR If I Had a Gryphon:

"Just right after all. VanSickle delivers lean, bouncy verse and an impressive array of offbeat creatures, while Atkinson's illustrations are bold and hint at dynamic motion." --Kirkus Reviews

“VanSickle’s rhymes are unflaggingly exuberant as the girl puts up with noisy harpies, biting chupacabras, and mischievous fairies, and Atkinson fills the pages with visual comedy.” --Publishers Weekly

“[T]he whimsical, rhyming story of a girl’s desire for the perfect pet is a fun and fabulous examination of being careful what you wish for and happy with what you have.” --Quill & Quire

"The humorous storyline, the strong rhyming scheme, and the bold illustrations by Cale Atkinson make If I Had a Gryphon a marvellous addition to the picture book genre. Sure to be a favourite among fantasy fans and those contemplating what their perfect pet might be—mythical or otherwise!” --CM Magazine

“[P]rovides a unique intro to the differences between myths and reality for little learners.” --Teacher Librarian

“[P]rovides a unique intro to the differences between myths and reality for little learners.”

Vikki VanSickle is the author of the acclaimed Clarissa books, including Words that Start with B, Love Is a Four-Letter Word and Days that End in Y. Vikki's most recent middle grade novel, Summer Days, Starry Nights, has been called "Summer reading at its best" and is a finalist for the 2015 Red Maple Award. After obtaining an MA in Children's Literature from UBC, Vikki's career began in bookselling at The Flying Dragon Bookshop, which earned her the 2011 CBA Young Bookseller of the Year award. She is a popular children's lit blogger and is frequently called upon to speak about kids' books for radio panels, conferences, and as Lainey Gossip's YA mentor! Currently she balances writing with her duties as the Marketing and Publicity Manager for Young Readers at Penguin Canada. The author lives in Toronto, ON.
Loading...
or support indie stores by buying on