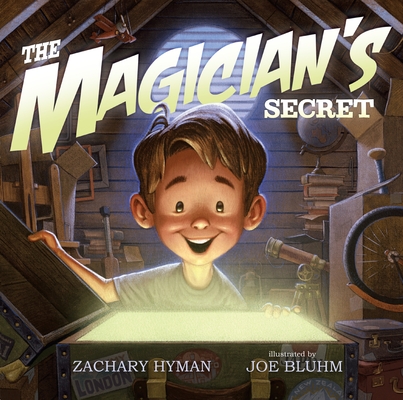 This action-adventure picture book featuring a grandfather and grandson duo celebrates the power of imagination and the magic of make believe.

Charlie loves when Grandpa comes to babysit because he always brings his magical imagination. Grandpa was a magician who knows the most amazing tricks; he can pull a rabbit from a hat and make a coin disappear. But what Charlie loves most are his wonderful adventure stories, and they all begin with something his grandfather has saved in his Magic Story Chest. An hourglass is a reminder of how he defended the treasure in King Tut's tomb from raiders. A long white scarf inspires the story about Grandpa's dogfight with the notorious Red Baron, the great First World War fighter pilot. A coconut shell heralds the story about his encounter with a nasty Tyrannosaurus Rex. Charlie's parents, though, aren't too sure they like Grandpa's stories and warn Charlie that they're just "tall tales." What is Charlie to believe? How can his grandpa convince him that all you need to do is believe and a dream can be turned into something real?

Praise For The Magician's Secret…

"The conversational tone draws the reader through the story. The remarkable art work by Joe Bluhm showcases the relationship between Charlie and his grandpa and transports the reader into each adventure, providing glimpses of how the imagination can make a dream a reality. . . . Any adult will be equally thrilled by the story, its rich language and the wonderful illustrations. . . . The Magician's Secret is a special way to share ideas between generations. Highly Recommended." --CM Magazine

ZACHARY HYMAN is a Canadian professional hockey player with the Toronto Maple Leafs. He is the author of Hockey Hero and The Bambino and Me, two inspiring sports-themed picture books. The Magician's Secret is his third book.

JOE BLUHM attended the Cleveland Institute of Art and from there went into the field of caricature and illustration, working at many theme parks. Training hundreds of artists from all around the world, Bluhm visited Tokyo, Canada, Germany and dozens of locations across the US before moving into animation in New York. He has worked with Virgin Media, FOX, Playhouse Disney, Ideocracy and Scholastic. His first book, REJECTS: The Extreme Art of Retail Caricature, has received much acclaim in the caricature, animation and illustration communities. In 2009, Bluhm relocated from New York to Shreveport, LA, to work as a storyboard artist for illustrator, writer and filmmaker William Joyce on his first personal project, The Fantastic Flying Books of Mr. Morris Lessmore, which was published as a picture book in 2012. Currently Bluhm is a story developer and concept artist at Moonbot.
Loading...
or
Not Currently Available for Direct Purchase