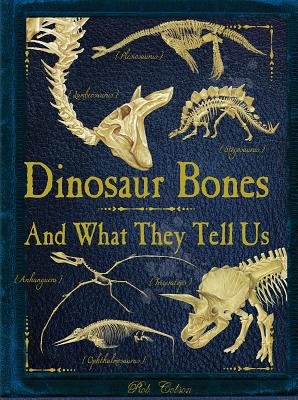 And What They Tell Us

The book begins with a brief introduction to life before the dinosaurs and the appearance of amphibians and early land mammals. Then, 150 million years later, the dog-sized Ornitholestes dinosaur appears. Chronologically thereafter, double-page spreads depict individual species, such as the Anhanguera, and dinosaur groups, like the duck-billed dinosaurs.

Each dinosaur species is shown by its skeleton, revealing what it looked like inside and out. A full-color computer graphic illustration shows each animal in its habitat. For the dinosaur groups, like the flying reptiles, individual species are shown in large full-color illustrations instead of just skeletons.

Succinct introductory paragraphs describe when and where each dinosaur lived and other interesting facts. The annotated illustrations highlight physical features and their purpose. A human-to-dinosaur shadow comparison reveals the size and shape. The Anhanguera, for example, had a wingspan of almost 15 feet but a body length of barely 8 inches.

Dinosaurs and prehistoric life are popular topics critical to understanding science and natural history. For all readers as well as supplemental to school curricula Dinosaur Bones is an essential comprehensive guide to these peculiar animals.

Rob Colson is the author of more than 40 books for children, on a range of subjects including science and technology, history and the natural world. He has also compiled quizzes and mathematical puzzles for children and adults. As an editor, he has worked on a wide variety of books on diverse subjects, from architecture and politics to Shakespeare and the movie industry. An avid student of history and science, he continues trying to figure out how the world works.
Loading...
or support indie stores by buying on