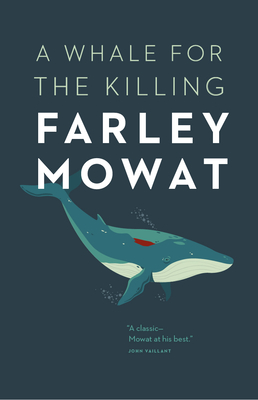 A Whale for the Killing

When an 80-ton fin whale became trapped in a lagoon near his Newfoundland home, Farley Mowat rejoiced at the unique chance to observe one of the world's most magnificent creatures up close. But some of his neighbors saw a different opportunity altogether: in a prolonged fit of violence, they blasted the whale with rifle fire, and scarred its back with motorboat propellers. Mowat appealed desperately to the police, to marine biologists, finally to the press. But it was too late. Mowat's poignant and compelling story is an eloquent argument for the end of the whale hunt, and the rediscovery of the empathy that makes us human.

Praise For A Whale for the Killing…

"Farley Mowat is a North American icon on a par with Matthiessen and Muir. He has brought the wilderness and its inhabitants into the lives of millions, awakening readers to issues and relationships that many never knew existed. For so many of us who hold the wild world dear, it was Mowat who gave us our first and lasting taste of its power, mystery and increasing vulnerability. A Whale for the Killing is a classicMowat at his best."
John Vaillant, author of The Tiger

Farley Mowat was born in Belleville, Ontario, in 1921. He began writing upon his return from serving in World War II, and has since written 44 books. He spent much of his youth in Saskatoon, and has lived in Ontario, Cape Breton and Newfoundland, while travelling frequently to Canada's far north. Throughout, Mowat has remained a determined environmentalist, despairing at the ceaseless work of human cruelty. Yet his ability to capture the tragic comedy of human life on earth has made him a national treasure in Canada, and a beloved storyteller to readers around the world. His internationally celebrated books include People of the Deer, The Dog Who Wouldn't Be, Sea of Slaughter, and The Boat Who Wouldn't Float.
Loading...
or
Not Currently Available for Direct Purchase