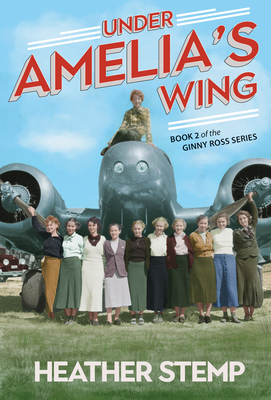 Book 2 of the Ginny Ross Series

It's 1936, and against all odds--but not without a few stumbles--Ginny Ross has made it to Purdue University in West Lafayette, Indiana. (Otherwise known as the academic home of her friend and mentor, Amelia Earhart.) For Ginny, this is the next step toward her dream of becoming a pilot, but it's harder than she expected: as the only girl in her mechanical engineering program, she constantly has to prove she deserves to be there. Ginny is determined not to let the jeers of her classmates and the opinions of some backwards-thinking professors hold her back, but she is a world away from her home in Harbour Grace, Newfoundland.

When Amelia takes off in 1937 to fly around the globe, Ginny can't shake a feeling of foreboding. Aviation is still relatively new and communication between air and ground is patchy at best. Then Amelia disappears without a trace, and Ginny must figure out if she has what it takes to forge ahead without her mentor. With the threat of the Second World War looming large, Ginny will need every bit of salty east coast grit she can muster.

Featuring historical photos of Amelia's time at Purdue University (1935-37), this STEM-friendly novel will appeal to anyone who has suffered from imposter syndrome and has had to prove their worth--to others and themselves.

Heather Stemp's Newfoundland heritage goes back to her great-grandfather who immigrated from Ireland in the mid-1800's. Her grandfather, grandmother, aunt, and father were all born and raised in Harbour Grace. Her earliest memories include fish and brewis, lassy bread, boiled suppers, and a house load of people talking, laughing, and calling her some sweet. After 30 years as an English teacher, Heather retired and wrote, Amelia and Me, a middle grade historical fiction, which was short listed for the 2014 Red Cedar Award. Her second book, Under Amelia's Wing, continues the story of her Aunt Ginny's adventures with Amelia Earhart. She is currently working on the third book in the Ginny Ross series. Heather lives in North Bay with her husband Don. She has two children and four grandchildren who love to read about their Newfoundland roots.
Loading...
or
Not Currently Available for Direct Purchase