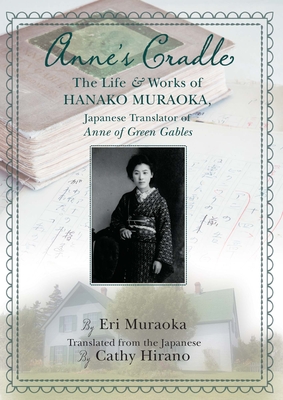 The Life and Works of Hanako Muraoka, Japanese Translator of Anne of Green Gables

The bestselling biography of renowned Japanese translator of Anne of Green Gables is available in English for the first time. The name Hanako Muraoka is revered in Japan. Her Japanese translation of L. M. Montgomery's beloved children's classic Anne of Green Gables, Akage no An (Redhaired Anne) was the catalyst for the book's massive and enduring popularity in Japan. A book that has since spawned countless interpretations, from manga to a long-running television series, and has remained on Japanese curriculum for half a century. For the first time, the bestselling biography of Hanako Muraoka written by her granddaughter, Eri Muraoka, and translated by the award-winning Cathy Hirano (The Life-changing Magic of Tidying Up), is available in English.
Born into an impoverished family of tea merchants in rural Japan at the end of the nineteenth century, Hanako Muraoka's fortunes change dramatically when she is offered a place at an illustrious girls' school in Tokyo founded by the Methodist Church of Canada. Nurtured by the Canadian missionaries who teach her, she falls in love with English poetry and literature. This love of the written word develops into a passion for writing and translating children's literature that sustains Hanako through devastating personal tragedies and the tumult of the twentieth century.
In 1941, after Japan attacks Pearl Harbor, Hanako abruptly resigns from her role of reading children's news over the radio -- for which she is known and loved throughout Japan as Radio Auntie. Branded as enemies, the peace-loving missionaries who nurtured Hanako in her youth and with whom she later worked have been forced to leave the country. But Hanako finds solace in a gift received from a Canadian friend: a copy of L. M. Montgomery's Anne of Green Gables.
Although it is a book from an enemy nation, the story of Anne Shirley brings back vivid memories of precious friends in distant lands, giving Hanako courage and hope for the future. Amidst the wail of air-raid sirens, she begins translating her copy into Japanese in 1943, fully aware that she risks imprisonment and even death if caught. Although she completes the majority of the work by the end of the war, it is only much later that a publisher decides to take a chance on a Canadian author previously unknown in Japan, unwittingly launching a cross-cultural literary legacy that continues to this day.
Anne's Cradle tells the complex and captivating story of a woman who risked her freedom and devoted her life to bringing quality children's literature to her people during a period of tumultuous change in Japan. Through the gift of Hanako Muraoka's translations, generations of Japanese readers have fallen in love with a plucky redhead from Prince Edward Island.

Eri Muraoka, granddaughter of Hanako Muraoka, graduated from Seijo University in Tokyo in 1990, majoring in literature and arts, and subsequently worked as a writer for a women's magazine. In 2014, her celebrated biography of her grandmother's translation of Anne of Green Gables into Japanese, An no Yurikago Muraoka Hanako no Shogai, became the basis of a six-month TV drama series on NHK, Japan's Public television station, which received high acclaim. In 2019 she published the biography of Tokiko Iwatani. Cathy Hirano graduated from International Christian University in Tokyo in 1983 with a BA in cultural anthropology and has been translating professionally since 1984. Her translations of YA fiction and fantasy have won several awards, including a 2020 Michael L. Printz Honor award for The Beast Player by Nahoko Uehashi. Her translations of The Life-Changing Magic of Tidying Up and its sequels by Marie Kondo are international bestsellers. She lives in Shikoku, Japan.
Loading...
or support indie stores by buying on