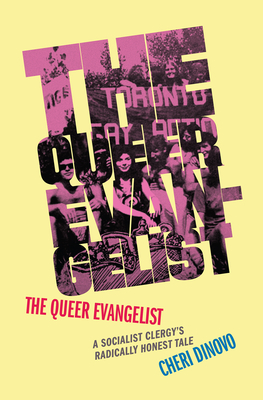 A queer minister, politician and staunch activist for LGBTQ rights, Cheri DiNovo went from living on the streets as a teenager to performing the first legalized same-sex marriage registered in Canada in 2001. From rights for queer parents to banning conversion therapy, her story will inspire people (queer or ally) to not only resist the system--but change it.

In The Queer Evangelist, Rev. Dr. Cheri DiNovo (CM) shares her origins as a young socialist activist in the 1960s, and her rise to ordained minister in the '90s and New Democratic member of provincial parliament. During her tenure representing Parkdale-High Park in the Legislative Assembly of Ontario from 2006 to 2017, DiNovo passed more LGBTQ bills than anyone in Canadian history.

She describes the behind-the-scenes details of major changes to Canadian law, including Toby's Law: the first Transgender Rights legislation in North America. She also passed bills banning conversion therapy, proclaiming parent equality for LGBTQ parents, and for enshrining Trans Day of Remembrance into Ontario law. Every year on November 20th in the legislature, the provincial government is mandated to observe a minute of silence while Trans murders and suicides are detailed.

Interspersed with her political work, DiNovo describes her conversion to religious life with radical intimacy, including her theological work and her ongoing struggle with the Christian Right. Cheri DiNovo's story shows how queer people can be both people of faith and critics of religion, illustrating how one can resist and change repressive systems from within.

"Living on the street, using drugs, abandoned by the adults in her life, all while identifying as 'queer' in a hostile world--any one of these things could have unravelled many of us. Cheri hauled herself up and not only survived but thrived. I love that this strong, brilliant, competent woman has told her story so honestly." --Kathleen Wynne, former premier of Ontario