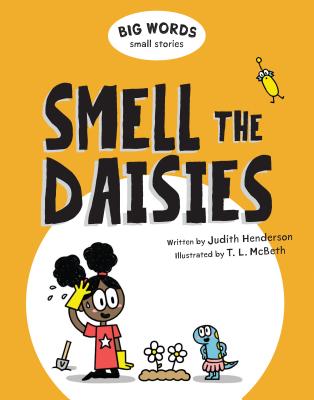 Meet Oleander, who likes to keep busy, and her pet salamander, Sally Mander, who prefers to take it easy. As they go about their days in these five stories, they're visited by the Sprinkle Fairy (she's the owner of a word factory in Sicily) and her helpers, who've slipped a Big Word into each story. Which means, when Sally Mander is slacking off on her gardening duties, Oleander accuses her of procrastinating. And when Sally Mander loses a fight to a bird over a worm, she demands that the bird regurgitate the worm immediately. It's all fun with words --- BIG time!

This collection of quirky, bite-sized stories is part of a clever series of highly original early readers by Judith Henderson. The text is dialogue driven, broken up into small bits, and accompanied by T. L. McBeth's small, simple and humor-filled spot illustrations, making it just right for emerging readers. These books are also terrific tools for expanding budding vocabularies, with the pronunciation and definition included for each of the five multisyllabic Big Words. Children will be trying them out in no time!

Judith Henderson is an Emmy Award-winning children's TV composer and producer. She is the author of the Big Words Small Stories series. Judith lives in Montreal, Quebec.

T. L. McBeth is the illustrator of Stegothesaurus and the Big Words Small Stories series. His work has been displayed at the Society of Illustrators. He lives in New York City.