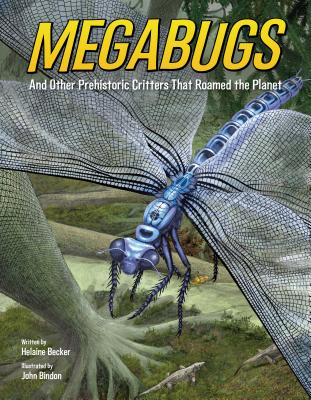 And Other Prehistoric Critters That Roamed the Planet

Can you imagine a bug the size of a small crocodile? How about one bigger than a large basketball player? As scary as it may seem, supersized, insect-like critters such as these roamed Earth long before humans. In this peek into prehistory, award-winning science writer Helaine Becker introduces seven of these megabugs, the ancestors of modern-day insects, spiders, crabs and other arthropods, which lived from 480 million to 47 million years ago. The book explores when, where and how they each lived, why they grew so big and what caused their extinction. Highly realistic illustrations show each megabug in its habitat. The end of the book includes a few supersized critters that are still around today!

This book hits the sweet spot for the many young fans of dinosaurs, prehistoric life and insects of all kinds. Thoroughly reviewed by paleontological experts, the information is presented in an easy-to-digest format for a hi-lo audience (high interest, low reading level). Each spread features one animal and loads of visuals --- such as a size chart that shows how big the animal could grow, a timeline placing it in its geological period and a map of where its fossils have been discovered. Sidebars provide further context on such topics as adaptation, fossils and the Permian Extinction. Detailed illustrations by John Bindon are based on fossil evidence and were created in consultation with experts in the field. This book has terrific STEAM applications in earth science and life science. End matter includes a glossary, resources and an index.

Helaine Becker is a bestselling children's author of more than seventy books, including Hubots, Monster Science, Zoobots, The Big Green Book of the Big Blue Sea and Lines, Bars and Circles. She is a two-time recipient of the Lane Anderson Award and a winner of the Silver Birch Award and the Red Cedar Award. She lives in Toronto, Ontario.

John Bindon is the illustrator of many books on prehistoric life. He has also worked on dinosaur exhibits for museums and theme parks, and on animation projects for the Discovery Channel and Walt Disney Animation Studios. John lives near Toronto, Ontario.


Praise For Megabugs: And Other Prehistoric Critters That Roamed the Planet …

A book for all school and public libraries.—CM Magazine

Information is presented clearly and simply in this fascinating (and slightly creepy) exploration of mind-boggling prehistoric megabugs.—School Library Journal