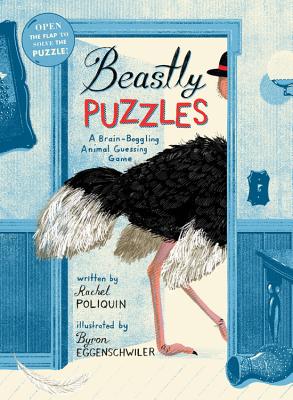 This book asks children: If you're given a list of features and characteristics, can you guess which animal they make?

This might seem easy enough. But solving the puzzles in this book is deviously, outrageously, almost impossibly tricky! Though the thirteen animals included are easily recognizable --- such as polar bear, snail, ostrich, pufferfish --- the clues are unexpected. For example: “3 billiard balls,” “dinosaur feet” and “five feather dusters.” And to further complicate matters, the clues are presented in scenarios unrelated to the animals --- the ostrich is composed of items in a “gentlemen's den” and the pufferfish clues are items in a spy submarine. Once readers make a guess (or if they get stumped!), they can open the gatefold to reveal the animal, with each clue explained and lots of additional fascinating facts.

Author Rachel Poliquin's concept for this intriguing, one-of-a-kind book is a spin on early natural histories, which introduced new animals by describing them as a hodgepodge of parts taken from familiar creatures. A beaver, for example, was described as being composed of a flounder, an otter, goose feet, squirrel paws and a rabbit's front teeth. The back matter includes a note explaining this, accompanied by visual references. Artfully and intricately illustrated by Byron Eggenschwiler, this innovative book offers an engaging mix of art and information that's sure to pique readers' curiosity. It works perfectly to enhance a broad range of life sciences curriculum topics, including animal adaptations, characteristics, evolution, ecology, habitats, ecosystems, biodiversity and food webs. The guessing-game format encourages inquiry-based learning --- and plenty of fun!

Definitely bamboozling---but in a good way, as exercises in unconventional logic.—Kirkus Reviews

... children and adults alike will have a blast guessing each animal.—School Library Journal, starred review

This book is a superb combination of problem solving, picture searching and animal science.—Calgary Herald

... a fresh take on one of the more traditional kidlit categories.—Quill & Quire, starred review

Rachel Poliquin is a writer and curator with a background in visual arts, cultural history and natural history. Rachel has also written for the Believer Magazine and the New York Times. Rachel lives in Vancouver, British Columbia.

Byron Eggenschwiler is an illustrator whose work has been featured in the New York Times, the New Yorker, the Wall Street Journal and GQ. He lives in Calgary, Alberta.