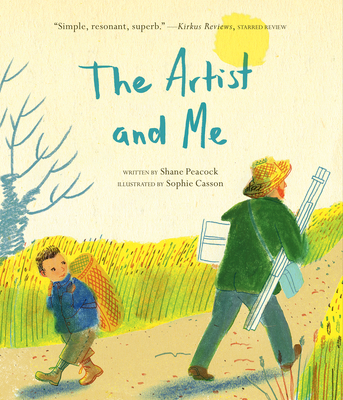 The Artist and Me (Hardcover)

Vincent van Gogh is now known as an acclaimed, incomparable Post-Impressionist painter. But when he lived in Arles, France, in the 1880s, he was mocked for being different. Back then, van Gogh was an eccentric man with wild red hair who used clashing hues to paint unusual-looking people and strange starry skies. Children and adults alike called him names and laughed at him. Nobody bought his art. But he kept painting. Inspired by these events, The Artist and Me is the fictional confession of one of van Gogh's bullies -- a young boy who adopted the popular attitude of adults around him. It's not until the boy faces his victim alone that he realizes there is more than one way to see the world. Artwork in the book uses vibrant color and texture to bring the laneways, caf's, and wheat fields of southern France to life while playing on scenes from van Gogh's own work. The lyrical text carries the emotional weight of the subject and will leave readers with the understanding that everyone's point of view is valuable.

Shane Peacock, biographer, journalist, and screenwriter, is also the author of six novels and three plays. He is the creator of the award-winning The Boy Sherlock Holmes series, has written for Orca's Seven series, and has been nominated for numerous prizes including the Governor General's Literary Award. He lives near Cobourg, Ontario, where he enjoys playing hockey with his kids. The Artist and Me is Shane's first picture book. Sophie Casson is a Montreal, Quebec-based illustrator who finds inspiration in Ukioy-e (a genre of Japanese woodblock printing), pre-war era children's books, post-war posters, and stencil art. She has been nominated for the Governor General's Literary Award, as well as been honored by Communication Arts, Applied Arts, and was runner-up for the Mr. Christie's Book Award.
or support indie stores by buying on
Copyright © 2020 American Booksellers Association