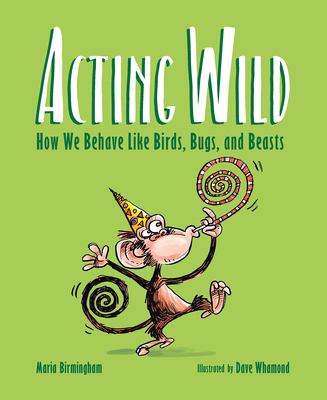 How are humans different from other animals? This is a question scientists have long tried to answer. As it turns out, some of the very things researchers once though distinguished humans--our creativity, our problem-solving ability, our capacity for planning or abstract thought--actually make us very similar to other animals This nonfiction book introduces several different behaviors that humans and other animals share, including farming, teaching, laughing, building, mourning, communicating, grooming, playing, traveling, using tools, and working together. Narrated by a funny and friendly ant, this book is packed with humor and playful phrasing to bring lightness to the exploration of animal behavior. Brought to life by bright and wacky cartoon-style illustrations, Acting Wild will leave kids with the understanding that acting like an animal is simply in their nature.

MARIA BIRMINGHAM is a longstanding contributor to OWL and Chickadee magazines, and the author of several books for young people, including the Lane Anderson Award winner Biometrics and the Norma Fleck Award nominee A Beginner's Guide to Immortality: From Alchemy to Avatars. Maria lives in Brampton, Ontario. DAVE WHAMOND is the award-winning author of several picture books including the Oddrey series, and a regular contributor to OWL and Chickadee magazines. His awards include the Blue Spruce, Silver Birch and Texas 2X2. He also has a syndicated cartoon strip called "Reality Check," which appears daily in a number of North American newspapers. He lives in Calgary, Alberta.
Loading...
or support indie stores by buying on