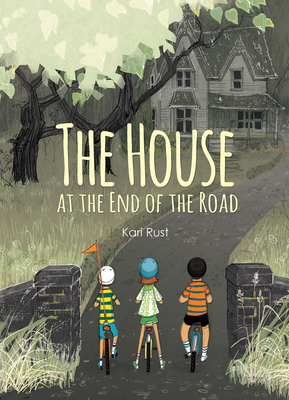 The House at the End of the Road

One summer, while exploring the town during their annual stay at Grandma's house, two siblings and their cousin come across a creepy old house. The kids poke around, one of them causing mischief and tossing rocks at the window, until they glimpse a ghost through the glass Later, Grandma reveals the house doesn't belong to a ghost--just old Mr. Peterson. After visiting again with better intentions, the kids discover Mr. Peterson's great sense of humor and that his house is full of fascinating things: old toys, photographs, even a film projector. They become regular visitors, until one day, Mr. Peterson is gone: he has left for a retirement home, and his house sits empty. Using odds, ends, and gifts he gave them, the kids create mementos of Mr. Peterson's home to give back to him. Full of heart, this picture book incorporates graphic novel elements to tell a layered and moving story about an intergenerational friendship. It shows how appearances can be deceiving: sometimes the best adventure awaits where you least expect it.

KARI RUST is an author/illustrator with a background in character animation and design. Also the creator of the OLA Blue Spruce Award nominee Tricky, Kari is a graduate of Emily Carr University of Art and Design. She lives in Vancouver, British Columbia.
Loading...
or support indie stores by buying on