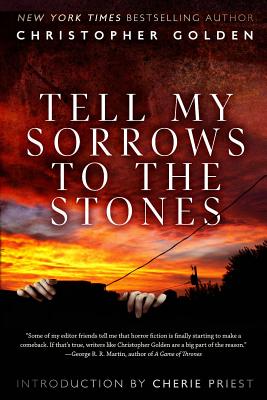 Tell My Sorrows to the Stones

A circus clown willing to give anything to be funny. A spectral gunslinger who must teach a young boy to defend the ones he loves. A lonely widower making a farewell tour of the places that meant the world to his late wife. A faded Hollywood actress out to deprive her ex-husband of his prize possession. A grieving mother who will wait by the railroad tracks for a ghostly train that always has room for one more. A young West Virginia miner whose only hope of survival is a bedtime story. These are just some of the characters to be found in Tell My Sorrows to the Stones.

"Some of my editor friends tell me that horror fiction is finally starting to make a comeback. If that's true, writers like Christopher Golden are a big part of the reason." --George R.R. Martin

CHRISTOPHER GOLDEN is the New York Times bestselling, Bram Stoker Award-winning author of such novels as Of Saints and Shadows, The Myth Hunters, The Boys Are Back in Town, and Strangewood. He has also written books for teens and young adults, including the Body of Evidence series, Poison Ink, Soulless, and The Secret Journeys of Jack London, co-authored with Tim Lebbon. His current work-in-progress is a graphic novel trilogy collaboration with Charlaine Harris entitled Cemetery Girl. Golden frequently collaborates with other writers on books, comics, and scripts. He has co-written three illustrated novels with Mike Mignola, the first of which, Baltimore, or, The Steadfast Tin Soldier and the Vampire, was the launching pad for the Eisner Award-nominated comic book series, Baltimore. As an editor, he has worked on the short story anthologies The New Dead, The Monster's Corner, and 21st Century Dead, among others, and has also written and co- written comic books, video games, screenplays, and a network television pilot. Golden was born and raised in New England, where he still lives with his family. His original novels have been published in more than fourteen languages in countries around the world. Please visit him at www.christophergolden.com.
Loading...
or
Not Currently Available for Direct Purchase