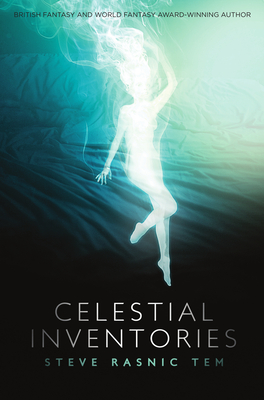 Celestial Inventories features twenty-two stories collected from rare chapbooks, anthologies, and obscure magazines, along with a new story written specifically for this volume. All represent the slipstream segment of Steve Rasnic Tem's large body of tales: imaginative, difficult-to-pigeonhole works of the fantastic crossing conventional boundaries between science fiction, fantasy, horror, literary fiction, bizarro, magic realism, and the new weird. Several of these stories have previously appeared in Best of the Year compilations and have been the recipients of major F & SF nominations and awards.

STEVE RASNIC TEM was born in Lee County, Virginia in the heart of Appalachia. He currently lives in Centennial, Colorado with his wife, the writer Melanie Tem. His novels include Excavation, The Book of Days, the recent Deadfall Hotel and, co-written with wife Melanie Tem, Daughters and The Man On the Ceiling. He is the author of over 350 published short stories, and is a past winner of the Bram Stoker, International Horror Guild, British Fantasy, and World Fantasy Awards. He was also a finalist for the Philip K. Dick, Shirley Jackson, and Theodore Sturgeon awards. His other story collections include City Fishing, The Far Side of the Lake, In Concert (collaborations with Melanie Tem), Ugly Behavior, and Onion Songs.
Loading...
or
Not Currently Available for Direct Purchase