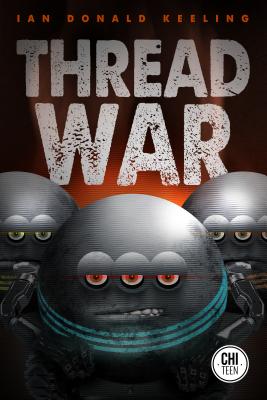 Johnny Drop caught a glimpse of limitless worlds in chaos in THE SKIDS--but now it's war when the threats he survived come knocking on his entire universe. The sphere has been saved, but the war is just beginning... Johnny has returned to the Skidsphere from the Thread, but his life will never be the same. Just because the sphere was repaired, doesn't mean it's right. Skids still vape each other every day. They still have a hard death at five years old. Together with Shabaz, the only other skid to return to the sphere, Johnny's trying to create change from within; but not every skid wants to change. There's rebellion in the air, and to make matters worse, the ground continues to quake and cracks are appearing once more in the system. Before they know it, Johnny and Shabaz are thrown back into a Thread that seems more vulnerable than ever before. In the very core of the system, an ancient battle has taken a new turn for the worse. Old allies become enemies and enemies become allies as the skids try to stop a war that threatens to tear the Thread apart.

Ian Donald Keeling: Ian Donald Keeling is an odd, loud little man who acts a little, writes a little, and occasionally grows a beard. His short fiction and poetry have previously appeared in Realms of Fantasy, On Spec, and Grain. He's on the faculty for sketch and improv at Second City in Toronto. He likes all forms of tag and cheese.
or
Not Currently Available for Direct Purchase
Copyright © 2020 American Booksellers Association