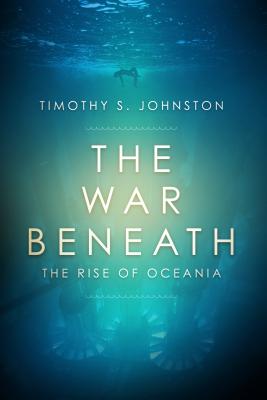 Living and working underwater can be a dangerous thing. First the bulkheads sweat, then there's a trickle of water . . .

. . . and then in an instant you're gone. The only thing left is a bloody pulp in the dark water and crushed bone fragments on the seafloor.

And you can't bolt to the surface in an emergency. . . . The bends will get you.

But that's not the worst. When you're living underwater and also working as a spy for your city, that's when things get really dangerous.

Truman McClusky has been out of the intelligence business for years, working the kelp farms and helping his city Trieste flourish on the shallow continental shelf just off the coast of Florida. Until his former partner shows up, that is, steals a piece of valuable new technology and makes a mad dash into the Atlantic. Before he knows it, Mac ends up back in the game, chasing the spy to not only recapture the tech, but to kill his former friend.

But when he learns the grim truth behind the theft, it sends his stable life into turmoil and plunges him into an even deadlier mission: evade the submarines of hostile foreign powers, escape assassins, and forge through the world's oceans at breakneck pace on a daring quest to survive, with more lethal secrets than he thought possible in his pocket.

The future of the city depends on McClusky . . . if he can make it back home.

Timothy S. Johnston is a lifelong fan of thrillers and science fiction thrillers in both print and film. His greatest desire is to contribute to the genre which has given him so much over the past four decades. He wishes he could personally thank every novelist, screenwriter, filmmaker, director and actor who has ever inspired him to tell great stories. He has been an educator for twenty years and a writer for thirty. He lives on planet Earth, but he dreams of the stars. Visit www.timothysjohnston.com to register for news alerts, read his blog and reviews, and learn more about his current and upcoming thrillers. Timothy is the author of futuristic murder mystery/thrillers THE FURNACE, THE FREEZER, and THE VOID. Follow Timothy on Facebook @TSJAuthor and Twitter @TSJ_Author.
Loading...
or
Not Currently Available for Direct Purchase