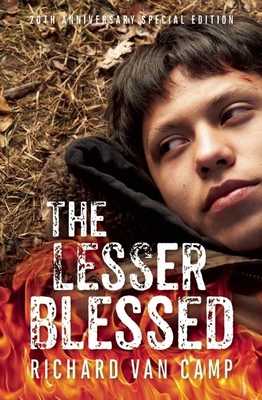 The 20th-anniversary edition of Richard Van Camp's best-selling coming-of-age story, with a new introduction and story by the author Larry is a Dogrib Indian growing up in the small northern town of Fort Simmer. His tongue, his hallucinations and his fantasies are hotter than the center of the sun. At sixteen, he loves Iron Maiden, the North and Juliet Hope, the high school "tramp." In this powerful and very funny first novel, Richard Van Camp gives us one of the most original teenage characters in Canadian fiction. Skinny as spaghetti, nervy and self-deprecating, Larry is an appealing mixture of bravado and vulnerability. His past holds many terrors: an abusive father, blackouts from sniffing gasoline, an accident that killed several of his cousins, and he's now being hunted and haunted by a pack of blue monkeys. But through his new friendship with Johnny, a Metis who just moved to town, he's now ready to face his memories -- and his future. The Lesser Blessed is an eye-opening depiction of what it is to be a young Dogrib man in the age of AIDS, disillusionment with Catholicism, and a growing world consciousness.

An internationally renowned storyteller and best-selling author, Richard Van Camp was born in Fort Smith, Northwest Territories, and is a member of the Dogrib (Tlicho) Dene Nation. He acted as a cultural consultant for CBC Television's North of 60. A graduate of the En'owkin School of Writing in Penticton, he completed his Bachelor of Fine Arts in Writing at the University of Victoria and completed his Master's of Creative Writing at the University of British Columbia. His new baby book Welcome Song for Baby: A Lullaby for Newborns is the official selection of the Books for BC Babies program and was given to every newborn baby in British Columbia in 2008. Richard was awarded Storyteller of the Year for both Canada and the US by the Wordcraft Circle of Native Writers and Storytellers.
Loading...
or support indie stores by buying on