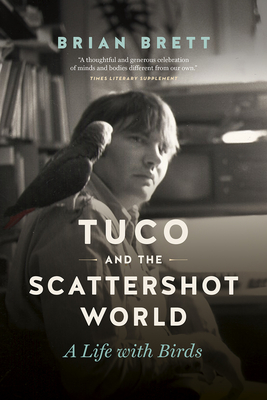 Tuco and the Scattershot World (Paperback)

A Life with Birds

For thirty years, Brian Brett shared his office and his life with Tuco, a remarkable parrot given to asking such questions as "Whaddya know?" and announcing "Party time " when guests showed up at Brett's farm. Although Brett bought Tuco on a whim as a pet, he gradually realizes the enormous obligation he has to the bird and learns that the parrot is a lot more complex than he thought. Simultaneously a biography of this singular bird and a history of bird/dinosaurs and the human relationship with birds, Tuco also explores how we "other" the world--abusing birds, landscapes, and each other--including Brett's own experience with a rare genetic condition that turned his early years into an obstacle course of bullying and nurtured his affinity for winged creatures. The book also provides an in-depth examination of our ideas about knowledge, language, and intelligence (including commentary from Tuco himself) and how as we learn more about animal languages and intelligence we continually shift our definitions of them in order to retain our "superiority." As Brett says, "Whaddya know? Not much. I don't even know what knowledge is. I know only the magic . . . and the mysteries." By turns provocative, profound, hilarious, and deeply moving, this fascinating memoir will remain with the reader long after the last page has been turned.

Brian Brett is an acclaimed poet and the author of numerous books, including Trauma Farm, which won the 2009 Writers' Trust of Canada Nonfiction Prize, and Tuco, A BBC Book Club Pick.

1. A major theme of Tuco and the Scattershot World is the concept of “Othering.” What does the author, Brian Brett, mean by this term? And when and how in the book does it occur?

2. What are some examples of othering that you have witnessed, or perhaps experienced, in your own life? And what causes or effects do you believe it had?

3. What do you think can limit, oppose, or challenge the impulse toward othering? Can some action or effort be made so that it will happen less often in society? Is such an effort worthwhile?

4. Parrots are complex birds. Brian sheds light on this complexity in his portrayal of Tuco. What surprised you about Tuco’s behavior or his connection with Brian?

6. Bullying and torment shrouds a lot of Brian’s childhood memories. How is Brian’s trauma from this bullying that he faced reflected in his adult worldview?

7. How does the isolation in Brian’s adolescence influence his relationship with Tuco? Did their bond change your perspective on the need for support animals?

8. Brian exhibits several profound acts of empathy for the environment and other living beings throughout the book. What were some instances when this empathy changed the course of his life? Would you have made the same choices that he did?

9. On page 314, Brian notes, “I no longer laugh at the dinosaurs. All brawn and no brains—when I was a child that’s why we thought they went extinct. The evidence today suggests our chance of lasting as long as dinosaurs is close to nil.” What is Brian implying here? What is the relevance of this statement to how we view ourselves as a species?

10. Throughout Tuco, Brian delves deeply into the biology and psychology of parrots and other birds. He also details human-bird interaction over time. What personal conclusions or growth does he draw from all of this research? Did it also help you to better understand this unique relationship?