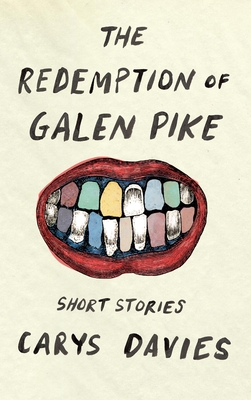 The Redemption of Galen Pike

“This is the most beautiful collection of short stories I have read in a long time. Each story feels perfect. The writing, the topic, and the resolution all left me completely satisfied. Their connecting theme is solitude or isolation and the struggle to move through it. The collection reminds me of some of Kevin Brockmeier's writing: beautiful, sometimes disturbing, and always memorable.”
— Lisa Sharp (E), Nightbird Books, Fayetteville, AR
View the List

From remote Australian settlements to the snows of Siberia, from Colorado to Cumbria, restless teenagers, middle-aged civil servants, and Quaker spinsters traverse expanses of solitude to reveal the secrets of the human heart.

Written with raw and rigorous prose, charged throughout by a prickly wit, the stories in The Redemption of Galen Pike remind us how little we know of the lives of others.

Carys Davies is currently a 2016-2017 Cullman Fellow at the New York Public Library.

Carys Davies is the author of two collections of short stories, The Redemption of Galen Pike and Some New Ambush. She is the winner of the Frank O'Connor International Short Story Prize, the Jerwood Fiction Uncovered Prize, the Royal Society of Literature's V.S. Pritchett Memorial Prize, the Society of Authors' Olive Cook Short Story Award, a Northern Writers' Award, and is currently a 2016-2017 Cullman Fellow at the New York Public Library. Born in Wales, she usually lives in north-west England.

1. While the title of this collection of short stories is taken from one story in particular, the theme of redemption appears in several of the stories. Choose characters from a few of the stories and discuss how they seek redemption. Do they attain redemption, and if so, do they do so in ways you expected?

2. Several of the characters face difficulties that result from being reluctant or unable to connect with other people for one reason or another. Identify some of the reasons that the characters in these stories find themselves isolated. Have you used any of these reasons/excuses to avoid making connections with people?

4. Think about the stories that surprised you the most. Why were they surprising to you? Did they feel emotionally true despite the surprises? Have you ever had emotional reactions that seemed contrary to what was “expected,” by you or by society? Discuss the story “The Miracle at Hawk’s Bay” in relation to these questions.

5. Some of the “twists” in the stories reveal the assumptions about stories that we make as readers, often connected to the stereotypical narratives tropes that conventional pop culture feeds us. Consider the first story in the collection, “The Quiet,” in light of these tropes. Discuss what your original expectation was for the story. Why did you jump to that conclusion? When you reach the final line of the story, how has your assessment of both characters changed?

6. Think about the collection as a whole. While many of the stories deal with dark subject matter and unconventional resolutions, the final story in the collection, “Sibyl,” concludes on a very different note. What was your emotional reaction when faced with this reversal? Do you think it was a good decision to end the collection on this story? Why or why not?

7. Did you have a favourite story in the collection? Why do you think it was your favourite?