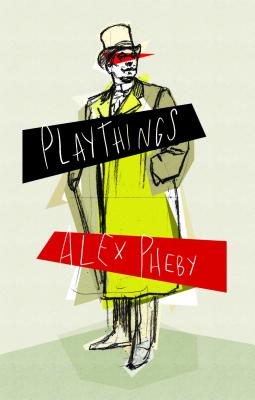 A hallucinatory, fragmentary, and tragic fictional telling of one of the most fa- mous psychotherapy cases in history, A lex Pheby's Playthings offers a visceral and darkly comic portrait of paranoid schizophrenia. Based on the true story of nineteenth-century German judge Daniel Paul Schreber, Playthings artfully shows the disorienting human tragedy of Schreber's psychosis, in vertiginous prose that blurs the lines between madness and sanity.

Alex Pheby was born in Essex and moved to Worcester in his early childhood. He currently lives in London, where he teaches at the University of Greenwich. His first novel, Grace, was published in 2009 by Two Ravens Press. His second novel, Playthings about the life of the Daniel Paul Schreber was published in 2015 in the UK by Galley Beggar Press. Widely acclaimed in media from the Guardian to the New York Times, and called the best neuro-novel ever written in the Literary Review, Playthings was shortlisted for the 2016 30,000 Wellcome Book Prize.
Loading...
or support indie stores by buying on