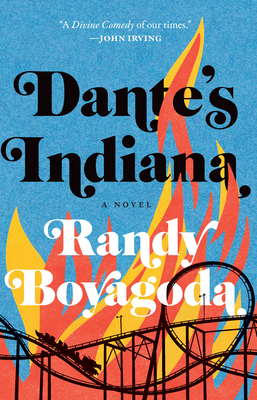 This book is a miracle."--Junot D az, Pulitzer Prize-winning author of The Brief, Wondrous Life of Oscar Wao

Following Original Prin, a NYTBR Editor's Choice and Globe and Mail Best Book, Dante's Indiana is an extraordinary journey through the divine comedies and tragedies of our time.

Middle-aged, married, but living on his own, Prin has lost his way. Desperate for money and purpose, he moves to small-town Indiana to work for an evangelical millionaire who's building a theme park inspired by Dante's Inferno. He quickly becomes involved in the difficult lives of his co-workers and in the wider struggles of their opioid-ravaged community while trying to reconcile with his distant wife and distant God. Both projects spin out of control, and when a Black teenager is killed, creationists, politicians and protesters alike descend. In the midst of this American chaos, Prin risks everything to help the lost and angry souls around him while searching for his own way home. Affecting and strange, intimate and big-hearted, Dante's Indiana is a darkly divine comedy for our time.

Randy Boyagoda is the author of six books, including the novels Governor of the Northern Province, Beggar's Feast, and Original Prin. His work has been nominated for the Scotiabank Giller Prize, IMPAC Dublin Literary Prize, and named a Globe and Mail Best Book of the year and selected as a New York Times Book Review Editor's Choice, in addition to generating international acclaim. A regular contributor to CBC Radio and to publications in North America and Great Britain, he is a professor of English at the University of Toronto, where he lives with his wife and their four daughters.
Loading...
or support indie stores by buying on