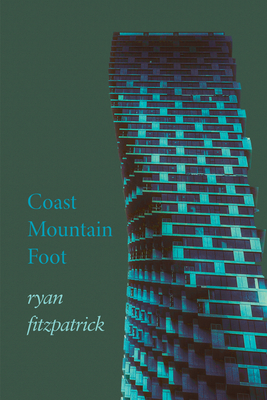 Written over the span of a decade and a half, Coast Mountain Foot keens its ear to the energies that connect cities, refracting the gesture of George Bowering's 1968 classic Rocky Mountain Foot. Occasioned by fitzpatrick's own move from Calgary to Vancouver in 2011, the book writes through the messy perspectives of the two cities as they bleed into one another - the energy in one city's streets suddenly appearing in the other - and engages with the urban and its intimacies through careful listening. The book's interlaced serial poetics is anchored by a series of lyric poems written in moments of transit - walking the streets, riding the bus, pausing in coffee shop windows. In these moments of reflection, fitzpatrick pinpoints his relationship to urban transformation. Written amid booms and busts, high and low tides, Coast Mountain Foot dwells on the gold rush and its aftermaths to ask: When the good times are all gone and it's time for moving on, what does it mean to move forward while snared by the past?

ryan fitzpatrick is the author of two books of poetry and fifteen chapbooks, including Fortified Castles (Talonbooks, 2014) and Fake Math (Snare/Invisible, 2007). With Jonathan Ball, he edited Why Poetry Sucks: An Anthology of Humorous Experimental Canadian Poetry (Insomniac, 2014). He has participated in the literary communities of Calgary, Vancouver, and Toronto. In Calgary, he was on the collective of filling Station magazine and was the organizer of the Flywheel Reading Series. In Vancouver, he earned his doctorate at Simon Fraser University, where he worked on contemporary Canadian poetry and space. In Toronto, he recently completed a Postdoctoral Fellowship at the University of Toronto Scarborough and was a co-organizer of the East Loft Salon Series with Rajinderpal S. Pal and Nikki Sheppy.
Loading...
or support indie stores by buying on