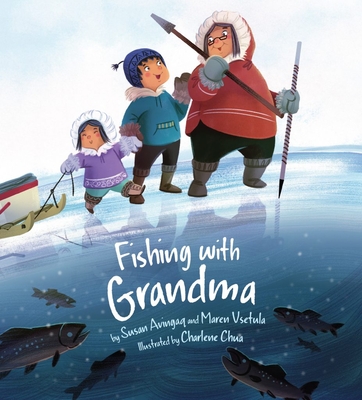 Adventure begins when Grandma takes her two grandchildren out for a trip to the lake. After showing the kids how to prepare for a fishing trip, Grandma and the kids enjoy a day of jigging in the ice for fish. Grandma shows them every step they need to know to complete a successful fishing trip, from what clothes to wear, to how to drill and clear holes in the ice, to how to make a traditional Inuit jigging rod. By the end of the day, the kids have a yummy meal of Arctic char, and they have also learned everything they need to know to go out on the lake on their own.

Susan Avingaq was born on the land and moved to the community of Igloolik, Nunavut, in the mid-1970s. She loves to go camping and fishing whenever she can and often brings new people along to teach them these land skills. She enjoys sewing and teaching younger people important cultural practices. She is an extremely resourceful person and thinks that this is an important quality to pass on to the younger generation. She has many grandchildren, whom she likes to share her stories with.Maren Vsetula is a teacher and educational writer. She loves to spend as much time on the land as she can, hiking, fishing, paddling, and dogsledding. She has lived and worked in Nunavut for over a decade.Charlene Chua worked as a web designer, senior graphic designer, web producer, and interactive project manager before she decided to pursue illustration as a career. Her work has appeared in American Illustration, Spectrum, and SILA’s Illustration West, as well as several art books. She illustrated the children’s picture books Julie Black Belt: The Kung Fu Chronicles and Julie Black Belt: The Belt of Fire. She lives in Hamilton, Ontario, with her husband and two cats.
Loading...
or support indie stores by buying on