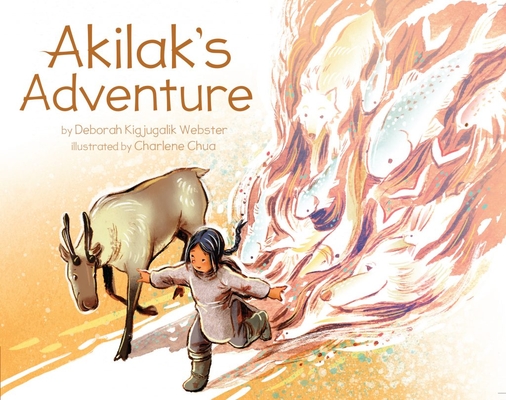 When Akilak must travel a great distance to another camp to gather food, she thinks she will never be able to make it. With a little help from her grandmother's spirit, and her own imagination to keep her entertained, Akilak manages to turn a long journey into an adventure.

Even though she at first feels that she will never be able to reach her destination, she keeps her grandmother's assurance that her "destination is not running away; it will be reached eventually" in mind and ends up enjoying the journey that at first seemed so daunting.

Deborah Kigjugalik Webster grew up in Baker Lake, Nunavut, where she loved to learn about her Inuit culture and heritage. She has a degree in Anthropology from Carleton University in Ottawa, Ontario, and works as an Inuit heritage researcher and author. The lack of published children’s literature featuring Inuit content compelled Deborah to write Akilak’s Adventure for her daughters, Sonja Akilak and Nicole Amaruq. Reading and making up stories with her daughters when they were young was a magical time in Deborah’s life, and she took inspiration from their vivid imaginations and sense of wonderment and excitement.Charlene Chua worked as a web designer, senior graphic designer, web producer, and interactive project manager before she decided to pursue illustration as a career. Her work has appeared in American Illustration, Spectrum, and SILA’s Illustration West, as well as several art books. She illustrated the children’s picture books Julie Black Belt: The Kung Fu Chronicles and Julie Black Belt: The Belt of Fire. She lives in Hamilton, Ontario, with her husband and two cats.
Loading...
or
Not Currently Available for Direct Purchase