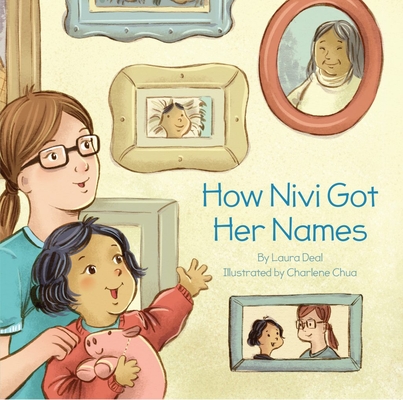 How Nivi Got Her Names (English)

Nivi has always known that her names were special, but she does not know where they came from. So, one sunny afternoon, Nivi decides to ask her mom how she got her names. The stories of the people Nivi is named after lead her to an understanding of traditional Inuit naming practices and knowledge of what those practices mean to Inuit. How Nivi Got Her Names is an easy-to-understand introduction to traditional Inuit naming, with a story that touches on Inuit custom adoption.

Laura Deal was born and raised in a small farming town in Nova Scotia. As a young adult, drawn to adventure, she climbed aboard an airplane for the first time ever and moved to Iqaluit, Nunavut. Laura immediately found appreciation for the culture, beauty of the land, and simplicity of northern life. Since 2005, she has rooted herself in the Canadian Arctic and started a family. A firsttime author, Laura wrote How Nivi Got Her Names for her daughter, Niviaq, who was adopted through Inuit custom adoption.Charlene Chua worked as a web designer, senior graphic designer, web producer, and interactive project manager before she decided to pursue illustration as a career. Her work has appeared in American Illustration, Spectrum, and SILA’s Illustration West, as well as several art books. She illustrated the children’s picture books Julie Black Belt: The Kung Fu Chronicles and Julie Black Belt: The Belt of Fire. She lives in Hamilton, Ontario, with her husband and two cats.
Loading...
or
Not Currently Available for Direct Purchase