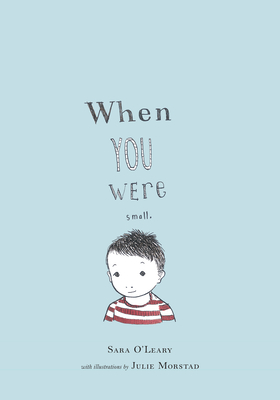 When You Were Small

This award-winning picture book is now available in paperback All children like to hear stories about when they were small. In this charming story, part of the popular The Henry Books series by Sara O'Leary and Julie Morstad, a young boy and his father reminisce together before bedtime. For chidren there is a whole period of their life that they can not remember and, for all they know, it could have been the most magical time of their life. The hardcover edition of When You Were Small won the 2007 Marilyn Baillie Picture Book Award, won First Prize at the 2007 Alcuin Society Awards for Excellence in Book Design, was shortlisted for the 2007 Amelia Frances Howard-GIbbon Illustrator's Award, and was a 2007 CanWest Raise a Reader Beginning Reader Pick. The other two titles in The Henry Books series include When I Was Small and Where You Came From.

Sara O'Leary is an author, playwright, and literary journalist. She is the author of the award-winning Henry Books, including Where You Came From, When You Were Small, and When I Was Small, as well as the picture book This is Sadie (Tundra). She teaches Writing for Children and Screenwriting at Concordia University in Montreal, QC, Canada. Julie Morstad is known for her surreal, whimsical work. Her books have garnered many accolades, including the Elizabeth Mrazik-Cleaver Picture Book Award, Marilyn Baillie Picture Book Award, Christie Harris Illustrated Children's Literature Prize at the BC Book Prizes, and First Prize at the Alcuin Society Awards for Excellence in Book Design; they have been shortlisted for the Governor General's Literary Award for Children's Illustration, Foreword Reviews' Book of the Year Award, Amelia Frances Howard-Gibbon Illustrator's Award, Ruth and Sylvia Schwartz Award (Picture Book Category), and Chocolate Lily Award (Picture Book Category). She lives in Vancouver, BC, Canada.
Loading...
or support indie stores by buying on