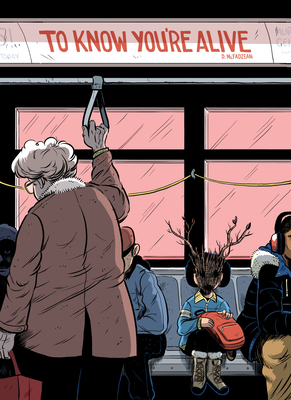 To Know You're Alive

Award-winning Canadian cartoonist Dakota McFadzean returns with a brilliantly dark collection that offers a glimpse into the cracks between childhood imagination and the disappointing harshness of adulthood. Populated by cruel bullies, exhausted parents, and relentless cartoon mascots, the world of To Know You're Alive renders the familiar into something that is alien and absurd. The characters in these stories long to uncover something uncanny in shadowy attics and beneath masks, only to discover that sometimes it's worse to find nothing at all.

Dakota McFadzean is a Canadian cartoonist who has been published by MAD Magazine, The New Yorker The Best American Comics, and Funny or Die. He has also worked as a storyboard artist for DreamWorks. McFadzean is an alumni of The Center for Cartoon Studies. He has two books available from Conundrum Press: Other Stories and the Horse You Rode in On, and Don't Get Eaten by Anything, which collects three years of daily comic strips. He is a co-editor/co-founder of the comics and art anthology Irene, and distributes his own short stories in his ongoing minicomic series, Last Mountain. McFadzean currently lives in Toronto with his wife and two sons.
Loading...
or support indie stores by buying on