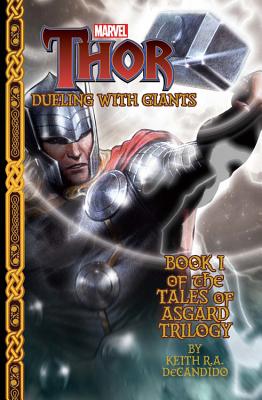 One of the greatest heroes from Marvel—and myth—returns as Thor battles the mightiest of the giants in a fight to the death. The first book in an action-packed trilogy, Dueling with Giants is a story of epic combat from start to finish, sure to entertain fans of Marvel comics and adventure novels alike.

During just another day for the God of Thunder, Thor is defending Asgard against invading trolls when the unthinkable happens—his hammer, Mjolnir, loses its enchantment, depleting Thor's strength. Thor is still more than a match for his enemies; after vanquishing them, he learns the secret to his sudden weakness: Mjolnir has been switched! And only one being is cunning enough to carry out such a trick: Thor's own adopted brother, Loki.

As punishment, Odin imprisons Loki for a year, but the trickster soon takes on other forms and escapes his imprisonment. He provokes a dispute between Odin and the giant Hrungnir—one that soon brings a full-scale attack on Asgard and a one-on-one challenge to Thor himself.

Dueling with Giants will be followed by two more riveting installments featuring Sif and the Warriors Three, all written by Marvel veteran and popular fantasy author Keith R.A. DeCandido. The Tales of Asgard Trilogy will be an adventure that Marvel readers won't soon forget.

Keith's other work includes bunches of other tie-in fiction based on TV shows ( Star Trek, Supernatural, Doctor Who, Sleepy Hollow ), games ( World of Warcraft, Dungeons & Dragons, StarCraft, Command and Conquer ), and films ( Serenity, Resident Evil, Cars ), as well as original fiction, most notably the "Precinct" series of high fantasy police procedurals that includes five novels ( Dragon Precinct, Unicorn Precinct, Goblin Precinct, Gryphon Precinct, and the forthcoming Mermaid Precinct ) and more than a dozen short stories. Some of his other recent work includes the Stargate SG-1 novel Kali's Wrath, the Star Trek coffee-table book The Klingon Art of War, the Sleepy Hollow novel Children of the Revolution, the Heroes Reborn novella Save the Cheerleader, Destroy the World, and short stories in the anthologies The X-Files: Trust No One, V-Wars: Night Terrors, With Great Power, and The Side of Good/The Side of Evil.

Keith is also a freelance editor (working for clients both corporate and personal), a veteran anthologist, a professional musician (currently with the parody band Boogie Knights, one of whose songs is called "Ragnarok"), a second-degree black belt in karate (in which he both trains and teaches), a rabid fan of the New York Yankees, and probably some other stuff that he can't remember due to the lack of sleep. He lives in New York City with several folks both bipedal and quadrupedal. Find out less at his hopelessly out-of-date web site at DeCandido.net, which is the gateway to his entire online footprint.