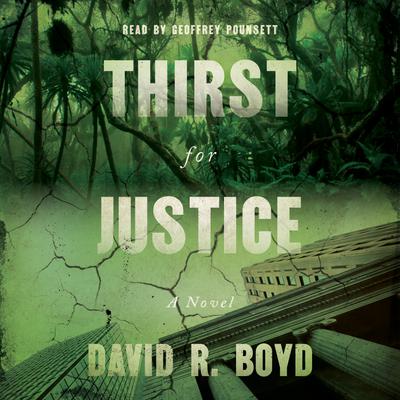 For readers of John Grisham and William Deverell comes a political thriller ripped from today’s headlines. Lawyer and environmental activist David R. Boyd writes a riveting thriller about the psychological toll of a humanitarian crisis. Filled with tension and courtroom drama, Thirst for Justice will have you questioning what you believe about right versus wrong.

Michael MacDougall is a talented trauma surgeon whose life in Seattle is slowly unraveling. Frustrated as an ER doctor and with his marriage in trouble, he volunteers with a medical aid charity in the Congo. Disconsolate at the lives he cannot save in the desperate conditions of the region, he is shattered by a roadside confrontation with the mercenary Mai Mai that results in unthinkable losses.

Back home in Seattle, he is haunted by his experiences in Africa and what he sees as society’s failure to provide humanitarian aid to those who most desperately need it. Locked in a downward spiral, he becomes obsessed with making his government listen to him and dreams up an act of terrorism to shock his nation awake.

Activist and lawyer David Boyd’s debut novel is a taut political thriller that begs the question: how far is too far when you’re seeking justice?